England forward Raheem Sterling and Jude Bellingham were victims of monkey chants during their World Cup qualifying game against Hungary at Puskas Arena on September 2. 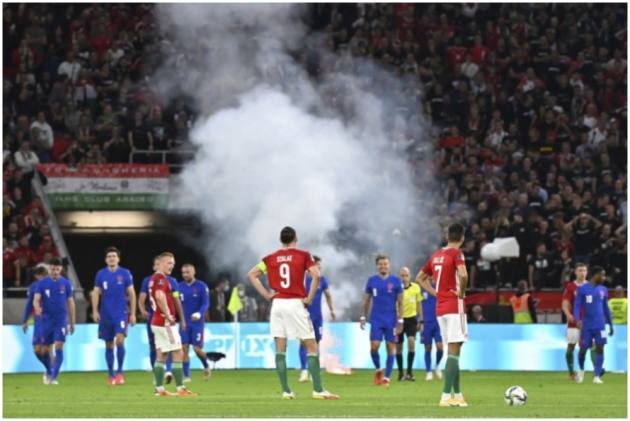 Hungary was ordered by FIFA on Tuesday to play one game without a crowd for the racist abuse of England players, although European football’s leading anti-discrimination group said it could be time to expel the team from World Cup qualifying for repeated discriminatory conduct by its supporters. (More Football News)

Monkey chants were aimed at England forward Raheem Sterling and unused substitute Jude Bellingham, who are Black, at Puskas Arena on September 2 — just as players in Budapest faced discriminatory abuse during the European Championship in June.

The Hungarian football federation was also fined 200,000 Swiss francs ($217,000), one of the largest financial penalties handed out to a country by the world governing body. The federation claimed it had implemented ‘all reasonable measures’ by asking fans not to be racist and that ‘punishing a crowd which creates a good atmosphere is ‘instead counterproductive’.

But in a sign of a systemic problem with racism from Hungarian fans, the FIFA punishment extends the country’s run of having to host games in empty stadiums because of racism in qualifiers for the 2014 and 2022 World Cups, Euro 2016 and the UEFA Nations League next year.

Hungary's match against England in Budapest would already have been played without spectators had FIFA been asked to implement a UEFA punishment for discriminatory abuse during European Championship matches. But that two-game ban on spectators will take effect next June during the Nations League, which the anti-racism FARE network sees as a sign of the disjointed way the sport punishes racism.

“The FIFA ban on Hungary for racism and the huge fine is welcome and a signal from FIFA of a renewed determination to punish racism,” FARE executive director Piara Powar told The Associated Press.

“But this also means that Hungary will serve bans from two different football governing bodies at European and international level at the same time, the principle of escalation has not been applied, it will not deal with the problem of racism inside Hungarian stadiums longer term.”

Hungary will have to host Albania on October 9 in an empty stadium in its next World Cup qualifier. The team will also have to play another FIFA match without a crowd if there are future incidents of abuse, with the second match of the punishment being suspended for a probationary period of two years.

But had FIFA factored in the previous cases and the UEFA punishment still to take effect, Powar said Hungary should have been facing being blocked from next year's World Cup in Qatar. “This case highlights the need to make sure that regulations that ensure a consistency of approach across governing bodies are in place,” Powar said.

"If all Hungarian offenses had been taken into account they would be facing exclusion from the World Cup, and remedial measures would have been put in place. There should be better co-ordination between confederations, such as UEFA, and FIFA, to coordinate action.

“In this case UEFA should have asked FIFA to apply their previous sanction and the Hungary vs. England match played behind closed doors. An administrative loophole has allowed racism to flourish.” FIFA’s disciplinary committee ruled there had been ‘racist behavior of numerous supporters’ during the England match this month that was played in front of a crowd of almost 60,000 at Puskas Arena.

The verdict came “after analyzing and taking into consideration all the circumstances of the case, specifically the seriousness of the incidents,” FIFA said in a statement highlighting ‘racist words and actions, throwing of objects, lighting of fireworks, blocked stairways’ by Hungary fans.

The Hungarian football federation said “behavior which was proved to be racist against players is to be deeply condemned” while saying only a “small minority” was responsible and disputing the need to close its stadium to fans.

“Anyone in the Puskás Arena who engaged in racist chanting or behaved in a discriminatory way can be seen to be opposing the federation and its national team,” the federation said. “These poorly-behaved individuals have intentionally caused damage to Hungarian football and therefore they can expect the most severe sanctions.”

FIFA’s claim to adopt a “clear zero tolerance stance against such abhorrent behavior in football” was challenged by English football's anti-racism organization. “What does zero tolerance approach even mean? Words that read good in print but we'll never actually adhere to them," tweeted Kick It Out's head of development Troy Townsend.

“Anyway, we have our own problems and don't even go this far with punishments.”