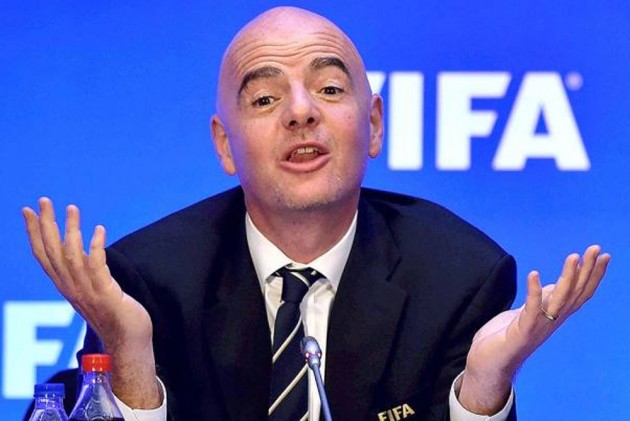 Gianni Infantino has denied FIFA colluded with clubs on the controversial Super League but stopped short of saying there had been no talks about the project. (More Football News)

The president of world football's governing body spoke out on Friday after the FIFA congress, describing the Super League attempted breakaway as "a rupture" in the game.

Asked whether FIFA had any involvement in the Super League planning or if it had offered support, Infantino gave a nine-minute response in which he said it was his job to always listen to anybody in the game considering a new format.

"Let me tell you that when we are analysing these questions, we should look at the facts and not rumours or corridor gossip, especially not coming from certain parts," Infantino said.

The proposed new competition was announced and quashed in the space of around 48 hours in April, a breath-taking episode that saw players, coaches, supporter groups, national associations, politicians and even royalty express dismay at the closed-door concept.

Liverpool, Manchester United, Manchester City, Chelsea, Arsenal and Tottenham announced they would be taking part, as did Barcelona, Real Madrid and Atletico Madrid from LaLiga, and Serie A giants Juventus, Milan and Inter also signed up. The project, a major threat to the UEFA Champions League, collapsed dramatically, but there are some who expect it to be revived.

"I know many clubs," Infantino told reporters in a conference call. "I speak with clubs for many years, since my days at UEFA, and when speaking to European clubs the Super League topic always is a topic for discussion.

"In the 16 years I was in UEFA we always managed that, and I can tell you there were projects that were far more advanced than the one we have seen recently.

"At FIFA it is also my responsibility and our responsibility to discuss with football stakeholders. Now to listen to some clubs and to speak with some clubs doesn't certainly mean in any way whatsoever that FIFA was behind, was colluding, was plotting or I don't know what words you used for any Super League project."

FIFA President on super league: “There is no doubt of FIFA’s disapproval. FIFA is here and I am here today as FIFA President to bring full support to European football, to UEFA, the 55 member associations of UEFA and of FIFA, to the leagues, clubs, players and to the fans." pic.twitter.com/VJShc9Wonf

Infantino pointed to a FIFA statement issued in January that said a breakaway competition would not be recognised by the world body.

"In that moment, the rupture was of course becoming inevitable and the rupture is never good, it's not good for anyone," Infantino said on Friday. "No war is good – never. We are ready to defend football from projects we know are wrong."

He added: "I don't close the doors to any discussion with anyone – never – about new formats, new ideas, new competitions. I'm ready to listen to everyone.

"This is my job ... the way I live the presidency of FIFA.

"I'm aware some people prefer to spin these discussions in a different way and I can understand that attacking me or FIFA is a good way to divert the attention from real problems that have never been addressed in the last years."

Infantino did not specify his target for that remark, but said: "I hope that as of today we can move to the real issues that football is facing."