The India national football team held Qatar, the reigning Asian champions, to a goalless draw last month. Against Bangladesh, the Igor Stimac-coached side will look for a win. 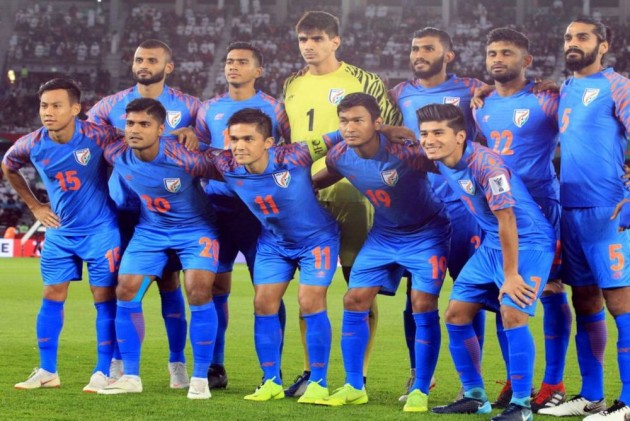 Buoyed by their gallant goalless draw against Asian champions Qatar, India would be looking to register their first win in the FIFA World Cup qualifiers when they take on Bangladesh in a group E second round match at the Salt Lake Stadium, Kolkata on Tuesday (October 15). (FOOTBALL NEWS)

India put a gritty performance against an attacking Qatar, to hold the reigning Asian champions to a goalless draw and earn their first point of the qualifiers after suffering a heartbreaking loss in the opening match against Oman.

ALSO READ: It's Official -- ISL, Not I-League To Be Indian Football's Premier League

With the city set to host the senior national men's team after a gap of nine years, the euphoria around the match has been immense with a mad rush for tickets as the Salt Lake Stadium is set to witness a packed house, giving the Igor Stimac-coached side a perfect stage to grab three points and keep their World Cup hopes alive.

The absence of defender, Sandesh Jhingan due to an ACL tear on his left knee is a big blow to the hosts. But the return of talismanic captain Sunil Chhetri after missing the last game will lift the team's spirit.

In his last appearance, Chhetri scored his 72nd international goal, the second most among active players, as India put up a dominating first-half display only to go down 1-2 after conceding late goals in their World Cup qualifier against Oman in Guwahati.

Goalkeeper Gurpreet Singh Sandhu took the charge in Chhetri's absence and thwarted a barrage of attacks from Qatar, making 11 saves in a heroic display to snatch a point from the 2022 World Cup hosts.

While defence, tactical formation and discipline were the highlights of their match against Qatar, the focus against Bangladesh, who are ranked 83 places below India, would be on the strikers.

Chhetri will remain the go-to man in the attacking zone, but the onus will also be on the likes of Balwant Singh and Manvir Singh to make an impact, something former India captain Bhaichung Bhutia has highlighted.

"It's only Sunil who's able to score. If he's not playing or does not score it becomes very, very difficult. We need to improve our forward lineup. In this Bangladesh game, it's going to be a big test for the strikers. It's not the defence but the forward line will have to deliver," Bhutia said.

Chhetri will also have the support of his Bengaluru FC teammates Udanta Singh and Ashique Kuruniyan, while Mandar Rao Desai and Sahal Abdul Samad will be key in creating chances.

As for the back line, Stimac will be forced to rejig his central-defence with Anas Edathodika likely to pair up with Adil Khan in front of Sandhu.

Jhingan's injury gives Anas with a perfect opportunity to prove himself again, especially after returning from retirement.

India failed to keep up the intensity in the final minutes because of fitness concerns against Oman but Stimac addressed the issue against Qatar. And it will be interesting to see how the Blue Tigers cope up with the challenge against Bangladesh, who have eight under-23 players in their squad.

Bangladesh head to the match after two consecutive defeats. They lost narrowly to Afghanistan and in their last match before going down 0-2 to Qatar. But the Jamie Day-coached side has put up a strong fight and created many chances in the two games.

The Englishman may have conceded that India are firm favourites but Bangladesh will certainly look to make an impact with their forward duo of Nabib Newaz Ziban and Saad Uddin.

On paper, India enjoy a commanding 15-2 head-to-head record in 28 meetings but Bangladesh have managed to stay unbeaten in their last two fixtures (1-1 in SAFF Championships, 2013 and 2-2 in an International friendly, 2014).