Australia, seeking a fifth successive World Cup appearance, fell to third place with 11 points from six games in Group B, one point behind Japan. Saudi Arabia is the leader with 16 points and are on course to clinch their sixth berth. 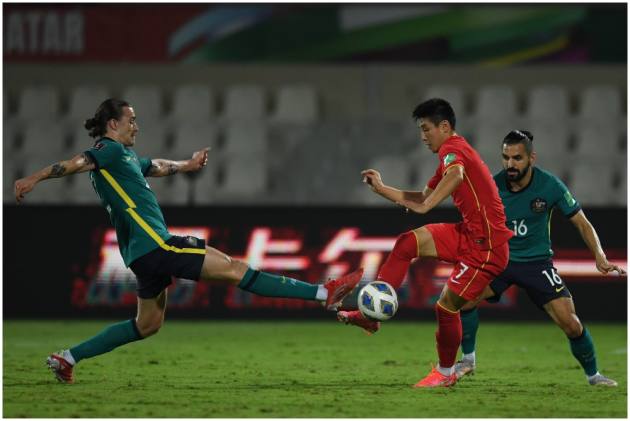 Australia slipped out of the automatic FIFA World Cup 2022 qualification spot on Tuesday after a 1-1 draw with China in Sharjah. (More Football News)

The Socceroos had been on course for a first win in three games thanks to Mitchell Duke’s first-half header but Wu Lei’s penalty, eventually given after a VAR review suggested defender James Jeggo handled the ball with 20 minutes remaining, earned China the draw.

“I don’t think we did enough tonight,” Australia goalkeeper and captain Mathew Ryan said. “We didn’t create enough clear-cut chances. Obviously there’s a controversial talking point but there are other moments throughout the game where we need to be better if we want to take away a result.”

Australia, seeking a fifth successive World Cup appearance, fell to third with 11 points from six games in Group B, one point behind Japan, which won 1-0 over Oman, in second. Saudi Arabia is the leader with 16 points after a 1-0 win over last-placed Vietnam and is on course to clinch their sixth berth.

Only the top two in both of the six-team groups are guaranteed a place in Qatar in November 2022. The two third-place finishers go to a playoff with the winner meeting a team from another confederation.

Saudi Arabia started strongly in Hanoi and after 30 minutes Saleh Al-Shehri’s looping header from inside the area was saved by Bi Tan Truong in the Vietnam goal, but the ball was adjudged to have already crossed the line.

Fahad Al-Muwallad seemed to extend the visitors’ lead from close range with 15 minutes remaining but it was ruled out by VAR due to a foul in the build-up.

Japan needed a late goal from Junya Ito to take the points in Oman and move into second. Oman stays fourth with seven points, two clear of China in fifth.

In Group A, Iran and South Korea look to have the top two spots sewn up. Iran defeated bottom team Syria 3-0 thanks to goals from Sardar Azmoun, Ehsan Hajisafi and Ali Gholizadeh to move onto 16 points.

South Korea defeated Iraq 3-0 in Qatar to stay two points behind and move toward a 10th successive World Cup appearance. Lee Jae-sung opened the scoring before the break while second half goals from Son Heung-min and Jung Woo-young sealed the win. It means that South Korea in second is eight points clear of third-placed United Arab Emirates.

A late Ali Mabkhout penalty earned the UAE a 1-0 win over Lebanon in Sidon, its first in the stage. It was enough to move the team that qualified for its first and only World Cup in 1990 above Lebanon. Iraq drops into fifth with four points, two above bottom team Syria.