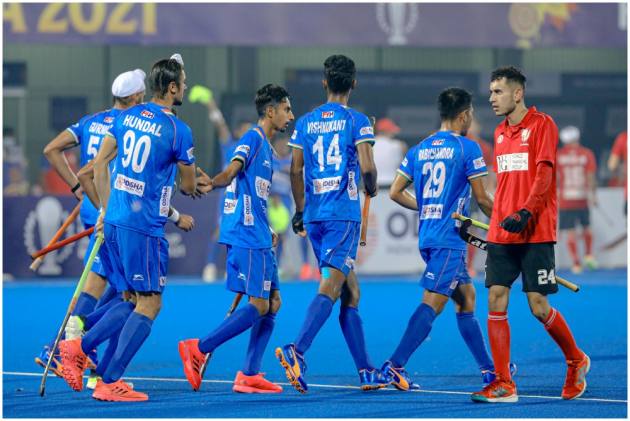 Their campaign might be back on track following a massive win over lowly Canada, but defending champions India are still not out of the woods and would need to beat Poland in their final Pool B match to qualify for the quarterfinals of the FIH Men’s Junior Hockey World Cup in Bhubaneswar on Saturday. (More Hockey News)

The Indians, one of the pre-tournament favourites, were given a rude shock in their opener when France stunned them 5-4. The defeat dealt a massive blow to India’s campaign and put paid to their hopes of topping their pool.

With one win and a defeat, India are currently placed second in Pool B ahead of Poland on goal difference. France, who have a perfect record till now, are set to top the pool. This means that in the quarterfinals, India face the prospect of running into European giants and top-seed Belgium, who are likely to top Pool A.

Given the scenario, complacency has no place in the Indian scheme of things if they wish to defend their title. The Indians were slow to get off the blocks in the tournament and lacked intent and purpose against France, leading to their loss.

But against Canada on Thursday, the hosts roared back and looked more organised. From here on, India will need to win every match to reclaim the title, a fact which chief coach Graham Reid is well aware of. “...But we can’t do anything about that now (loss against France). If we have to win back-to-back titles, we will have to beat every team henceforth,” Reid had said.

“We will not like to think ahead of us, we have a match against Poland before that and that’s what we will be thinking about. We have to win that before we think about the next stage.” The Indian colts will have to be at their best in every match to progress in the tournament.

“It is a learning experience for the boys. Every match is one experience. That's what I have always been telling the senior players as well,” said Reid, who guided the senior Indian team to a historic bronze medal in the Tokyo Olympics.

In both matches, India created numerous scoring opportunities but failed to capitalise on them. Vice-captain and star drag-flicker Sanjay Kumar (6 goals) has been in scintillating form for India, scoring consecutive hat-tricks, while Uttam Singh has been the team’s go-to man in the forward line.

In Sanjay, Araijeet Singh Hunda, who also scored a hat-trick against Canada, and Shardanand Tiwari, the Indians boast of three potent penalty corner specialists with three different styles and techniques. If that is not enough, Abhishek Lakra is the team’s fourth option from set-pieces, an alarming sign for any opponent.

The Indian mid-field is being led by skipper Vivek Sagar Prasad, who would look to pass on his Tokyo Olympics experience to his less experienced teammates. The Indian backline, however, will have to be on its toes going into the business end of the tournament, especially after the lacklustre outing against France.

In other matches on Saturday, France will take on Canada, Pakistan will play Egypt in Pool D, while in Pool A, South Africa will take on Malaysia followed by Belgium’s tie against Chile. Top two teams from four pools will qualify for the quarterfinals, which will begin on December 1.