Defending champion India’s hopes for back-to-back FIH Men’s Hockey Junior World Cup title went up in smoke on Friday when they lost 4-2 against Germany in the semifinals. Germany will face Argentina in the final. 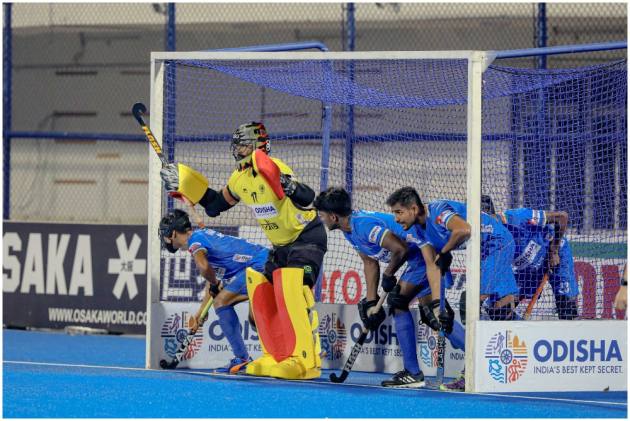 Hopes of title defence shattered, a demoralised India would look to put behind the disappointment quickly and get their acts together as they seek revenge against France in the bronze medal play-off match of the FIH Men’s Hockey Junior World Cup in Bhubaneswar on Sunday. (More Hockey News)

Defending champions India’s quest for a second consecutive Junior World Cup title ended after they suffered a 2-4 defeat at the hands of six-time winners Germany in the semifinal on Friday.

Germany will meet Argentina in the summit clash, while the Indians will get an opportunity to avenge their 4-5 loss to France in their tournament opener.

But to finish on the podium, the Indian juniors will have to lift their game by leaps and bounds, and make amends of their sloppy show against Germany. The Indians, who last won the Junior World Cup title in Lucknow in 2016, looked a pale shadow of themselves against Germany.

Consistency is something that has been missing from India's game since the start. The hosts didn't play flawless hockey in any match of the tournament so far.

And, that is something which would bother chief coach Graham Reid, who is in charge of the junior team in this tournament after having guided the senior side to a historic bronze medal at the Tokyo Olympics.

Against Belgium in the quarterfinals, the Indian defence was extraordinary but the same backline was caught napping by the Germans on Friday.

The likes of Yashdeep Siwach, vice-captain Sanjay Kumar, Shardanand Tiwari and Abhishek Lakra failed to control Germany's press and they would be looking for a much better outing on Sunday to at least clinch a consolation third-place finish.

Reid had no qualms in admitting that his wards lacked in every department of the game against Germany.

“Germany showed what we need to be doing as far as defending is concerned. They were in front, they tackled the ball well, they tackled in groups. If you have to win at the world stage at this level, basics has to be flawless,” he said after the match on Friday night.

“We created opportunities but they weren't quality ones. We have to come out on Sunday and avenged that first game we played against France.”

Against Germany, there was no cohesion between the midfield and forwardline with only Uttam Singh showing his brilliance in patches. With four quality penalty corner specialists in the side in Sanjay, Araijeet Singh Hundal, Tiwai and Lakra, India's weapon is set-pieces but they secured just one against Germany which Sanjay couldn't utilise.

The Indian players looked to be short of ideas when the ball was in their possession. Instead of trying to earn penalty corners, the Indians were guilty of holding on to the ball too long and dribbling too much inside the opponent's circle.

The coach said decision-making from the Indian players has to be spot on against France if they desire to finish on the podium. “Smart players decide at that time and make better decisions. Our decision-making wasn't good as it should have been (against Germany). It was visible in all ends of the pitch.

“Our decision wasn't up to scratch at the midfield as well. At the end of the day that's what gives you outcomes the ability to make good decisions inside the circle,” Reid said.

With forecast of heavy showers and high winds on Sunday due to the landfall of cyclone Jawad near Puri, which is just around 65 km from here, pitch conditions are expected to be tough on the final day of the showpiece junior event.