After having won their previous two Pool A fixtures, India face Uzbekistan in the FIH Series Finals hockey tournament. 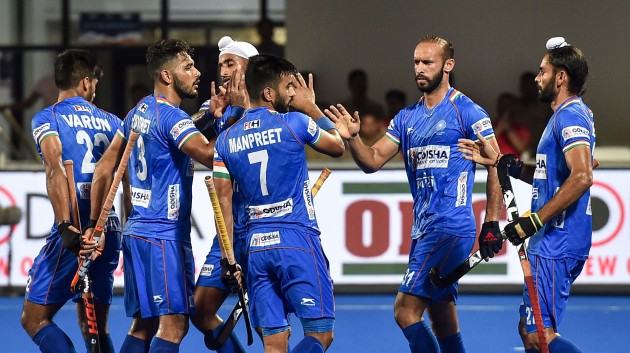 India will start as overwhelming favourites against Uzbekistan when the hosts take on their lower-ranked rival to seal a semifinal spot in the FIH Series Finals hockey tournament. The encounter will take place on 10th June (7 PM IST).

After thrashing Russia 10-0 in their tournament-opener, India scrapped past 21st ranked Poland 3-1 in the second match. The hosts are ranked fifth in the world.

India are now sitting atop Pool A with maximum points from two games. They are virtually assured of a direct berth in the semi-finals because of better goal difference. But they cannot afford to be complacent against world no. 43 Uzbekistan in their final Pool A match as two places are up for grabs from this event for the FIH Olympic Qualifiers, to be held in October-November this year.

"World rankings do not matter at all as the gap between teams are very small. Rankings are there only for the International Hockey Federation (FIH) to place teams in certain order," India coach Graham Reid had said.

After a clinical performance against Russia, the patchy show against Poland showed that consistency is an area, which has to be addressed at the earliest. The Indians created numerous scoring opportunities against Poland but the forward-line missed plenty of chances.

"One of my main goals is to get consistency in terms of performance. Sometimes you have to learn to play at the highest level and develop the practice of winning. With Australia that was always our goal, to play in the final of every tournament," the coach said.

With the level of opposition not the best, the Indian citadel has hardly been tested in the tournament.

Reid has shuffled his two goalkeepers PR Sreejesh and Krishan Bahadur Pathak in the four quarters in the previous two games, giving them more game time. But what is a worrying factor is that both Sreejesh and Pathak have hardly been tested so far.

Alongside Nilkanata Sharma, skipper Manpreet Singh has been one of the outstanding performers for India in the tournament so far as he not only held the midfield together but also scored goals.

It is the form of Indian strikers which would be a cause of concern for Reid. The likes of Akashdeep Singh, Mandeep Singh and fit-again Ramandeep Singh, who returned after almost one year, will have to take more responsibility in India's quest for Tokyo Olympic qualification.

As per the format of the tournament, the top two teams of each pool will directly qualify for the semifinals, while the second and third-placed sides will play in the cross-overs to enter the last-four round.

Meanwhile, in other matches of the day, USA will play Asian Games champions Japan in Pool B while South Africa will square off against Mexico.