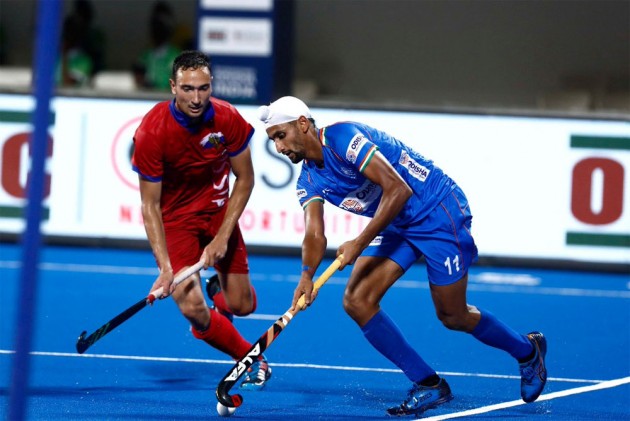 Akashdeep Singh slammed a hat-trick as favourites India scored goals at will to thrash Uzbekistan 10-0 and storm into the semifinals of the FIH Series Finals hockey tournament at Bhubaneswar on Monday.

Amit Rohidas (15th), Nilkanta Sharma (27th) and Gursahibjit Singh (45th) were the other goal getters for the winners.

India finished atop Pool A with an all-win record and will play the winner of the cross-over match between Japan and Poland in the semifinals on Friday, while USA, who topped Pool B, will take on the winners of the other cross-over game between Russia and South Africa.

The last Pool A match turned out to be a mismatch as the Indians controlled the proceedings from start to finish.

The action was all in the Uzbekistan half as India attacked in numbers from the word go and secured as many as five penalty corners in the first four minutes, the last of which was converted by Varun to hand lead to the home team.

Next was Akashdeep's turn to register his name in the scoresheet as he scored from a rebound from another short corner in the 11th minute.

It continued to rain goals in the second quarter as India scored four more to go into the breather with a handsome 7-0 lead.

Varun scored his second in the 22nd minute from a field effort before Akashdeep found the Uzbek net with a reverse hit two minutes later.

Young Nilkanta was not to be left behind as he scored from a rebound in the next minute from India's next short corner.

Mandeep completed the first half rout, pushing in from close range after being fed by Ramandeep Singh.

India dominated after the change of ends but could score just once in the third quarter when Gursahibjit guided the ball into the net in the 45th minute after receiving a through pass from Sumit.

Thereafter, Aksshdeep completed his hat-trick before Mandeep scored another at the stroke of the final hooter to round off the drubbing.

It was a no contest at all as Uzbekistan failed to threaten India's goal even once in the entire 60 minutes.

India's domination can be gauged from the fact that they earned as many as 12 penalty corners as against the rivals' none.

The Indians had 23 shots on goal while the Uzbeks had none.