India defeated Japan, 7-2, in the all-Asian encounter of the FIH series Final semi-finals, at the Kalinga Stadium. 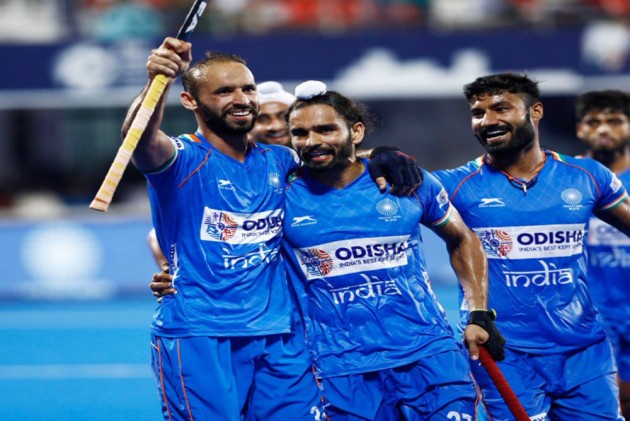 India defeated Japan 7-2 in the semi-finals of the FIH Men's Series Final on Friday here at Kalinga Stadium.

The all-Asian encounter started at a high tempo, as it took only 90 seconds for Japan to open their account after a great pass from Kenta Tanaka was converted into a goal by Kenji Kitazato. India immediately put pressure on Japan in an attempt to get a quick equaliser.

After a great save from Yusuke Takano following a shot from Nilakanta Sharma and a missed opportunity by Gursahibjit Singh, the home team levelled the score with a penalty corner from Harmanpreet Singh, who celebrated his 100th cap in the best possible way.

But Japan were determined to give a hard time to the 5th ranked team in the world. First, Kenta Tanaka, at the conclusion of one of his numerous fast runs, put the Indian defence under pressure. Then, in the 20th minute of the game, Kota Watanabe managed to hit the ball into the goal, making it 2-2.

But once again, India reacted with no delay. First Ramandeep Singh scored from a penalty corner and then Hardik Singh doubled their team's tally within two minutes (4-2).

In the second half, India won numerous penalty corners and it was Ramandeep Singh - later elected Man of the Match - who converted, scoring his second goal of the night. He was soon copied by his teammate Gursahibjit Singh, increasing the score to 6-2 at the end of the third quarter.

The final quarter gave the opportunity to India's youngest player Vivek Prasad to put his name on the scoresheet, much to the delight of the home crowd. Despite several penalty corners, Japan could not find the net in this second half.

"Japan played very well. They were attacking and did not give us easy chances in the first two quarters. But after that our players played very well, they got good chances and we converted penalty corners. We're really happy because we're qualified for the Final and for the FIH Olympic qualifiers. Tomorrow is a really important game for us because South Africa is doing very well. We hope we'll play as we played today," Manpreet Singh, the Indian captain said.

Earlier in the day South Africa defeated USA 2-1 in the semi-final and secured their place in the final.

India will play in the final against South Africa, whereas Japan and USA will compete for third place on June 15.