Nicolo Barella and Ivan Perisic were on target in each half as Inter eased to a 2-0 win over Fiorentina in Friday's Serie A clash. 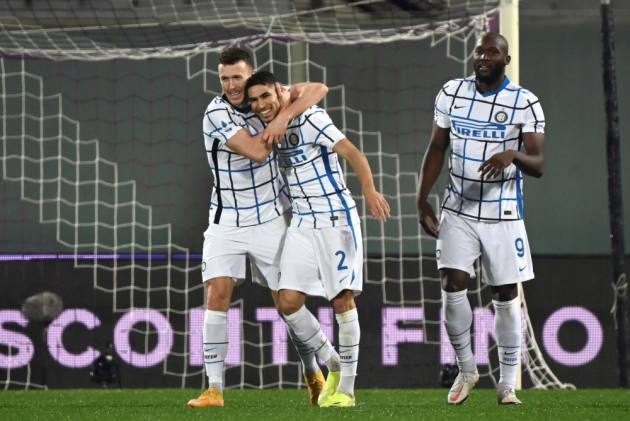 Inter moved top of the Serie A table with a comfortable 2-0 victory over Fiorentina in Friday's clash at Stadio Artemio Franchi. (More Football News)

The Nerazzurri had failed to win at Fiorentina in the league in six attempts since 2014 but goals from Nicolo Barella and Ivan Perisic put an end to that run.

Barella's sublime opener after 31 minutes was added to by Perisic's close-range finish in the second half, but only after Giacomo Bonaventura had struck the crossbar for the mid-table hosts.

That proved enough as Inter, who were without suspended head coach Antonio Conte, moved a point above Milan - having played a game more than their bitter rivals.

An off-balance Barella was denied by a superb Bartlomiej Dragowski reaction early on but the midfielder found the back of the net from his next attempt.

Inter worked a short corner and Alexis Sanchez set up Barella, who curled an unstoppable shot into the bottom-right corner from 25 yards.

Fiorentina would have been level before half-time if not for Samir Handanovic, who tipped Bonaventura's angled drive onto the bar and saved Cristiano Biraghi's follow-up effort.

Inter doubled their lead when Perisic tapped into an empty net seven minutes into the second half after Achraf Hakimi raced in behind and squared the ball.

Romelu Lukaku, making his 50th start in Serie A, had a goal chalked off soon after, as Perisic was deemed to be offside in the build-up.

Dragowski was then called into action twice in the space of two minutes to save Perisic's drive and substitute Roberto Gagliardini's header from close range.

Inter could not add to their tally but it mattered little as they completed a league double in this fixture for the first time since 2013-14.

10 - Achraf #Hakimi is the only defender to have been involved in 10 goals in the Top-5 European Leagues this season: 6 goals + 4 assists. Bullet.#FiorentinaInter #SerieA pic.twitter.com/HJsuV3a85e

What does it mean? Inter overtake Milan... for now

Inter's form has been rather inconsistent since the turn of the year, Conte's men having failed to win back-to-back league matches in 2021 prior to this encounter.

However, they have now won three of their last four in the top flight without conceding and have increased the pressure on Milan, who host bottom side Crotone on Sunday.

The visitors could have been more clinical in front of goal, scoring from two of their six attempts on target, but this was otherwise the perfect response to Tuesday's 2-1 Coppa Italia semi-final first-leg defeat to Juventus.

After a frustrating opening half an hour for Inter, Barella took matters into his own hands with a sublime curled finish to open the scoring.

It was Barella's third league goal of the season, adding to his five assists, which makes this the midfielder's best Serie A season in terms of goal involvements.

Belgium international Lukaku celebrated a half-century of appearances in the Italian top flight but remains on 298 career goals for club and country after a frustrating evening.

He failed to find the net from any of his three efforts, heading over from a good position late in the first half from the best of those before having a goal ruled out.

Inter will be looking to overturn a one-goal deficit when they travel to Juventus in the second leg of their Coppa Italia semi-final tie on Tuesday. Fiorentina head to Sampdoria on their return to Serie A action in nine days' time.