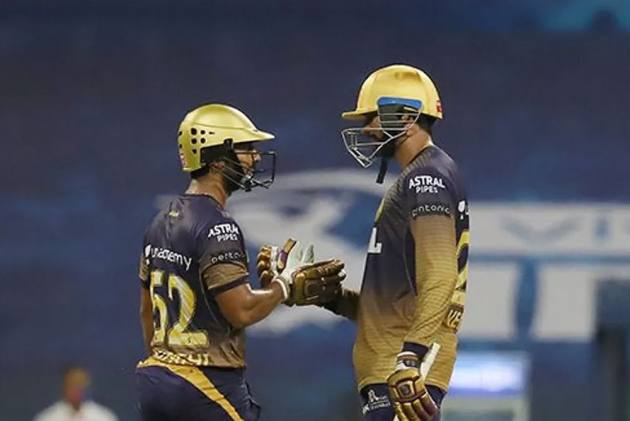 Kolkata Knight Riders (KKR) kept their Indian Premier League (IPL) 2021 playoffs hopes alive with a seven-wicket win against defending champions Mumbai Indians in Abu Dhabi on Thursday. And of the architects of that thumping win was Venkatesh Iyer.

After making his IPL debut with an unbeaten 41 off 27 against Royal Challengers Bangalore, Iyer hit a 30-ball 53 to lay the foundation for KKR's chase. The two-time champions won the match, second on the trot, with 29 balls to spare.

Hailing the youngsters' talent, captain Eoin Morgan said that "in the practice games too he has gone on to play this way." But the Englishman revealed the selection headache, saying that fitting the 26-year-old into KKR's playing XI "has been difficult with a lot of talented guys" in the squad.

Iyer and Rahul Tripathi (74 not out off 42 ) shared an 88-run stand for the second wicket to effectively seal the deal for KKR.

Morgan also hailed the performances of spinners Sunil Narine and Varun Chakravarthy, who pulled things back for KKR after Rohit Sharma (33 off 30) and Quinton de Kock (55 off 42) gave Mumbai a very good start at Sheikh Zayed Stadium.

"Sunil and Chakravarthy are two formidable bowlers. Sunil has been integral to KKR winning when they've done. Varun is the fresh guy," Morgan said, while also admitting that "the first two games in this phase has been the template" for KKR.

Next, they play Chennai Super Kings on Sunday (September 26) at the same venue.