Flame For 2020 Tokyo Olympics Lit In Greece Amid Coronavirus Lockdown

With spectators banned, an actress dressed as an ancient Greek high priestess lit the flame using the rays of the sun reflected off a concave mirror, launching a week-long torch relay in Greece before the flame is handed to Tokyo organisers on March 19 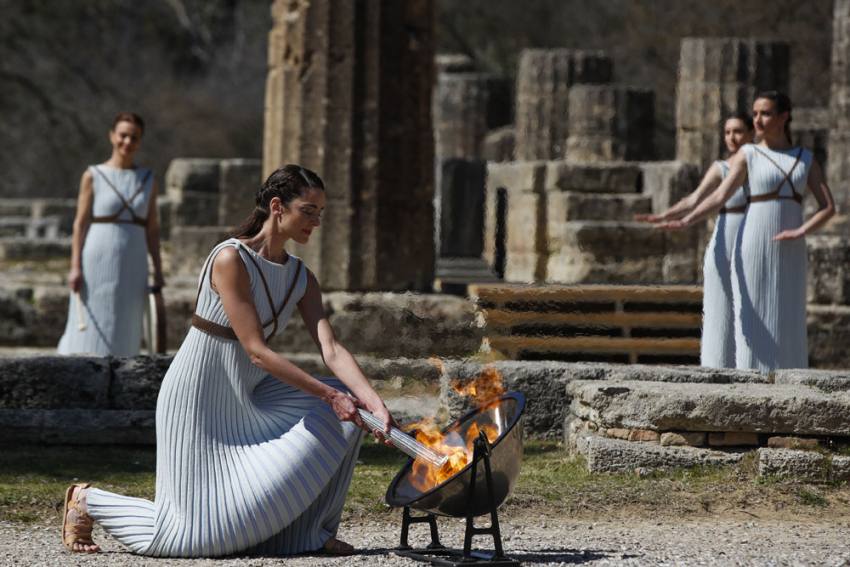 Greek actress Xanthi Georgiou, playing the role of the High Priestess, lights up the torch during the flame lighting ceremony at the closed Ancient Olympia site, birthplace of the ancient Olympics in southern Greece, Thursday, March 12, 2020. Greek Olympic officials are holding a pared-down flame-lighting ceremony for the Tokyo Games due to concerns over the spread of the coronavirus. Both Wednesday's dress rehearsal and Thursday's lighting ceremony are closed to the public, while organizers have slashed the number of officials from the International Olympic Committee and the Tokyo Organizing Committee, as well as journalists at the flame-lighting.
AP Photo
Agencies March 12, 2020 00:00 IST Flame For 2020 Tokyo Olympics Lit In Greece Amid Coronavirus Lockdown 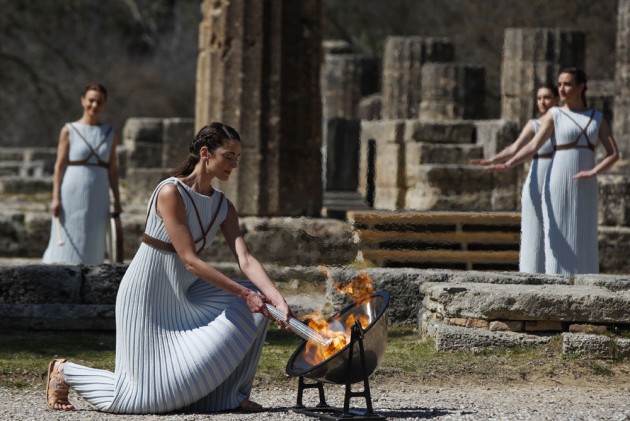 The Olympic flame for the 2020 Tokyo Games was lit in ancient Olympia on Thursday amid an unprecedented health lockdown as Greece registered its first death from coronavirus.

With spectators banned, an actress dressed as an ancient Greek high priestess lit the flame using the rays of the sun reflected off a concave mirror, launching a week-long torch relay in Greece before the flame is handed to Tokyo organisers on March 19.

"When the flame returns to Tokyo after 56 years, hope will light the way across the entire country," he said.

Now it seeks to use the 2020 Olympics to show the world it has regained its creative flair and innovative energy, but also as a means to highlight reconstruction following the 2011 earthquake and tsunami in Fukushima.

"Japan will demonstrate its groundbreaking innovation and boundless creative energy with regards to sustainability, technology and human-centred growth," Bach said.

"The Olympic Games... will again be a symbol of hope and confidence for all Japanese people."

But with the coronavirus causing devastation in world sport, doubts are increasingly being raised over whether the Olympics can be held as scheduled from July 24 to August 9.

Organisers have insisted the Games will go ahead as planned and the IOC has said there has not yet been any talk of cancellation or postponement.

The IOC has said it will coordinate closely with the World Health Organization, which has now officially classified the outbreak as a pandemic.

Once in Japan, the relay will start from Fukushima and travel along routes eventually leading to the capital.

Closed to the public

The hydrogen that powers the Olympic flame will be produced in the town of Namia in Fukushima, one of the worst affected areas, said Toshiaki Endo, acting president of the Tokyo 2020 organising committee.

And the torch has been partially produced from recycled aluminium originally used to build temporary housing units in the aftermath of the quake, he said.

Greek Olympic shooting champion Anna Korakaki was the initial torch bearer, the first time a woman has been chosen for the role.

She was followed by Mizuki Noguchi, gold medallist in the women's marathon at the 2004 Athens Olympics.

Hollywood actor Gerard Butler will be among the runners once the torch relay reaches Sparta. Butler starred as the ancient Spartan King Leonidas in the 2007 epic '300'.

The ceremony was held without spectators after dozens of people tested positive for COVID-19 in the broader western Peloponnese. Up to 12,000 had been expected to make their way to Olympia, where the ancient Games were held.

Only 100 accredited guests from the International Olympic Committee and the Tokyo 2020 Organising Committee, compared to 700 originally, were allowed to attend Thursday's ceremony.

The dress rehearsal on Wednesday was also closed to the public and dinners and galas arranged for the torch lighting have been scrapped.

The only precedent is in 1984 when the Greek leg of the torch relay was abandoned in a protest by Greek organisers against what they saw as the commercialisation of the Los Angeles Olympics.