Frank de Boer was happy to end his wait for a first win as coach of the Netherlands in a 3-1 Nations League victory over Bosnia-Herzegovina. 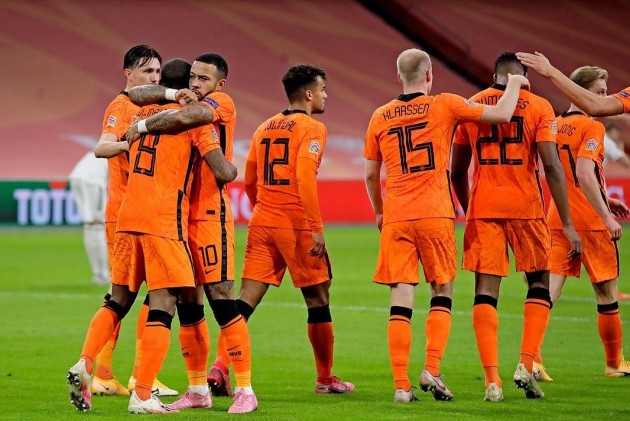 Frank de Boer was happy to end his wait for a first win as coach of the Netherlands in a 3-1 Nations League victory over Bosnia-Herzegovina. (MORE FOOTBALL NEWS)

After replacing Ronald Koeman at the helm, De Boer went four games without a win prior to Sunday's success in Amsterdam.

Georginio Wijnaldum became the first player since Tonny van der Linden in 1961 to score twice in the first 13 minutes of a game for the Netherlands before Memphis Depay made it 3-0, De Boer's men denied a clean sheet by Smail Prevljak.

De Boer was pleased to end his wait for a win, with his side a point behind Italy with one game left to play in Group A1.

"Of course you are waiting for that first victory," he said.

"But we had two interests today. Staying in the race for the final round of the Nations League and we are now in the World Cup qualifying in pot one. That is nice. Pot two also contains good countries, but now we are certainly avoiding the very strong countries."

Wijnaldum's brace gave the Netherlands a dream start before Depay scored his first international goal in 538 minutes of play and after attempting 21 consecutive shots without finding the back of the net.

De Boer said his team had focused on making a fast start, and he was glad it paid off.

"As staff we indicated that we had to give full throttle for the first 20-25 minutes and make a difference," he said.

"This can be done by keeping the pace high. We did a fantastic job."

While pleased with the start, Liverpool midfielder Wijnaldum rued the way the Netherlands finished the encounter.

"We were ready for a victory," he told NOS.

The Netherlands wrap up their Group A1 campaign away to Poland on Wednesday.