Timo Werner has only scored four Premier League goals in 15 appearances this season, and his showing at Arsenal worried Frank Lampard 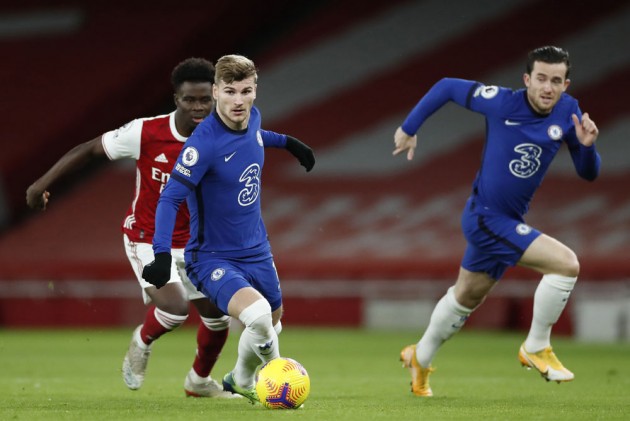 Frank Lampard admitted Timo Werner was just not delivering the goods for Chelsea as the striker's goal drought reached 10 games in the 3-1 defeat to Arsenal. (More Football News)

The Germany international was substituted at half-time with Arsenal already 2-0 up, and Lampard declared he would have to speak to Werner about his performances.

Werner had one shot blocked and sent another dribbling limply wide, and his overall contribution was a concern for Lampard, who said the team's attitude in the first 45 minutes was worryingly "lethargic".

With a passing accuracy of just 57.1 per cent, Werner was struggling to get the simple things right, a worrying position for a player of his proven quality.

He has started all 15 of Chelsea's Premier League games this season, having joined for a reported £47.5million from RB Leipzig, but has only four goals to his name, plus four assists.

"The goals not going in is something an attacking player will get judged on," Lampard said. "Today, Timo wasn't giving us enough with or without the ball.

"With some of it we have to give him time, because it's a different league, but also we have to get there quickly.

"I'll have a conversation with him."

10 – Timo Werner has now failed to score in his last 10 games in all competitions, his longest drought since a run of 12 matches between March and September 2016 across spells at Stuttgart and RB Leipzig. Barren.

Lampard refused to say whether Jorginho would stay on penalty duties for Chelsea after the midfielder missed from the spot for the second time in the Premier League this season.

His chance came towards the end, with Chelsea having pulled a goal back through Tammy Abraham and started to rattle the hosts.

Had second-half substitute Jorginho made it 3-2, Chelsea would have fancied a stoppage-time equaliser.

Asked whether there might be a change of takers, and whether Jorginho's technique might have been found out by goalkeepers, Lampard left the decision for another day.

"We'll see … I won't comment on that one," said the Chelsea head coach, speaking in a post-match news conference.

"I will say Jorginho added a lot to the team in the second half, so we'll deal with the penalties going forward."

It was a harrowing game for Lampard, who said "all the basics were wrong" in Chelsea's early efforts.

"I'm not sure if 'complacent' is the right word, but there was definitely a lethargic approach to the first half," he said.

"No matter whether you're playing Arsenal at a tough moment, who've got quality players, or any team in the Premier League, you can't turn up lethargic.

"I am concerned by what's at the bottom of it but I'm not sure it's definitely complacency.

"But if you come and play slow on and off the ball, you're going to have a big problem trying to get a result.

"The message was clear about what the game was: we had to attack it in the right way and we didn't."