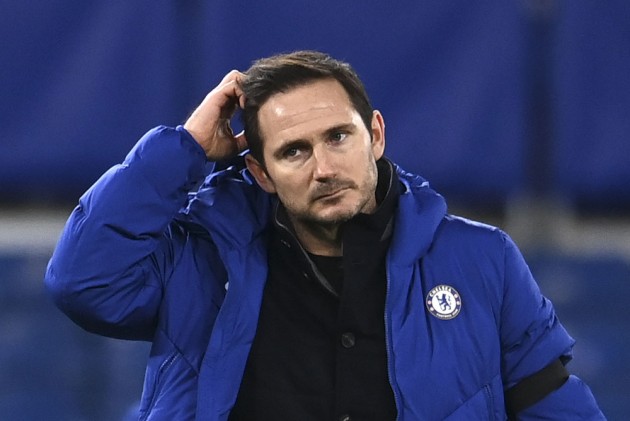 Frank Lampard has been sacked as Chelsea head coach, the Blues have confirmed. (More Football News)

Widespread reports emerged on Monday that the Blues were set to dismiss Lampard after a run of two wins in eight Premier League games left them ninth, 11 points off the pace.

Confirmation soon followed, bringing to an end Lampard's 18-month reign back at the club where he remains the all-time record goalscorer, with former Paris Saint-Germain boss Thomas Tuchel expected to be appointed as his successor.

Chelsea statement did not comment on Tuchel's potential arrival but read: "This has been a very difficult decision, and not one that the owner and the board have taken lightly.

"We are grateful to Frank for what he has achieved in his time as head coach of the club. However, recent results and performances have not met the club's expectations, leaving the club mid-table without any clear path to sustained improvement.

"There can never be a good time to part ways with a club legend such as Frank, but after lengthy deliberation and consideration it was decided a change is needed now to give the club time to improve performances and results this season."

Owner Roman Abramovich added: "This was a very difficult decision for the club, not least because I have an excellent personal relationship with Frank and I have the utmost respect for him.

"He is a man of great integrity and has the highest of work ethics. However, under current circumstances we believe it is best to change managers.

"On behalf of everyone at the club, the board and personally, I would like to thank Frank for his work as head coach and wish him every success in the future.

"He is an important icon of this great club and his status here remains undiminished. He will always be warmly welcomed back at Stamford Bridge."

Lampard was unable to replicate the success of his playing career at Stamford Bridge, where he won 11 major trophies in 13 years.

This was his second senior coaching role, having fallen just short of promotion from the Championship with Derby County in 2018-19.

A return to Chelsea followed, with Lampard given the task of overseeing a period of transition as the club served a transfer ban while bringing through a number of players from their talented academy.

Mason Mount, Tammy Abraham and Reece James all established themselves as regulars as the Blues qualified for the Champions League last term and reached the FA Cup final.

Expectations were raised by significant expenditure in the close-season transfer window, with Timo Werner, Kai Havertz, Hakim Ziyech and Ben Chilwell among those arriving, and Chelsea initially thrived, climbing to the top of the table in December 2020.

But the 2020-21 campaign has since gone on a downward spiral, their poor run of form including defeats to Everton, Wolves, Arsenal, Manchester City and Leicester City.

The latter three reverses were especially humbling, handing struggling Arsenal a much-needed win before being completely outplayed by City. Leicester - title contenders unlike Chelsea - were comfortable in Lampard's final league game in charge on Tuesday.

Lampard's tenure ended with a 3-1 victory against Luton Town in the FA Cup in which Abraham scored a hat-trick, although Werner's struggles continued with a penalty miss.

Werner and Havertz have failed to perform consistently following their big-money moves from the Bundesliga.

They will hope to be boosted by the apparently imminent appointment of fellow German Tuchel, who won two Ligue 1 titles and made the Champions League final with PSG.