Riding on Fraser Hornby's goal, Reims beat amateur side Thaon 1-0 to march into the pre-quarterfinals of the French Cup 2021-22. It was Hornby's first goal for Reims, who had Hugo Ekitike sent off in 67th minute. 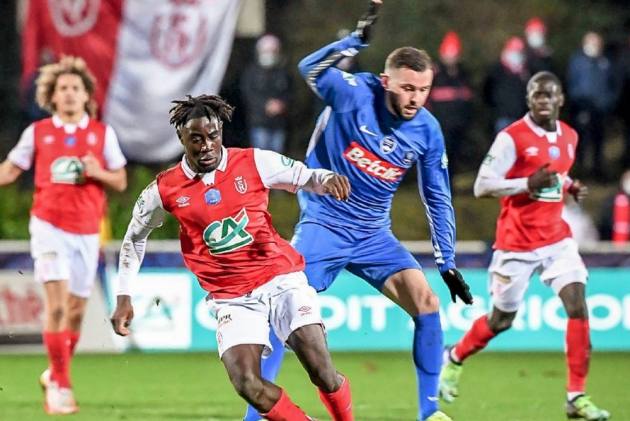 Fraser Hornby had been on the field only three minutes when he scored with seconds of injury time remaining, as a 10-man Reims scraped a 1-0 win at amateur side Thaon to reach the last 16 of the French Cup 2021-22. (More Football News)

The imposing Scottish striker got ahead of the defense to meet a last-gasp free-kick from the left, sparing Reims a tense penalty shootout with no extra time played in the competition. Reims had brought on top scorer Hugo Ekitike in the 60th minute, only for the player to get sent off six minutes later.

So it proved an inspired move by Spanish coach Oscar Garcia, who played for Barcelona, to bring on the 1.95-meter Hornby, who was once on the books of Premier League Everton. It was Hornby's first goal for Reims.

In Sunday's last game, 10-time French Cup winner Marseille won 3-0 at amateur side Chauvigny. Poland striker Arkadiusz Milik opened the scoring with a neat volley after grabbing a hat trick in the previous round.

Monaco had seven players out after they contracted the coronavirus and won 3-1 at second-tier Quevilly-Rouen, with France striker Wissam Ben Yedder opening the scoring and German forward Kevin Volland grabbing two goals.

Saint-Etienne is last in the first division but took control with early goals and added two late ones in a 4-1 win at amateur side Jura Sud.

Nancy, which launched the career of France great Michel Platini, won 4-3 in the shootout after a 1-1 draw. The 19-year-old Belgium forward Jeremy Doku put Rennes ahead in the 58th minute and Mickael Biron equalized 20 minutes later.

Second division Toulouse scraped a 1-0 win at fifth-tier Cannes, which was once a regular in the top flight and won the Cup in 1932, and second-tier Amiens advanced on penalties against amateur side Linas-Montlhery.

Fourth-tier Versailles advanced with a 4-0 win against fifth-tier La Roche-sur-Yon, and fourth-tier Bergerac won 5-4 on penalty kicks against third-tier Creteil after a 0-0 draw.

French clubs are back playing for the first time in 1 1/2 weeks, a break which allowed players to go home or on holiday.

They all tested positive for the coronavirus with Messi recovering in Argentina.