Messi told a news conference on Wednesday that it's up to PSG coach Mauricio Pochettino when he plays, but noted he's had 'no real training sessions' for a month 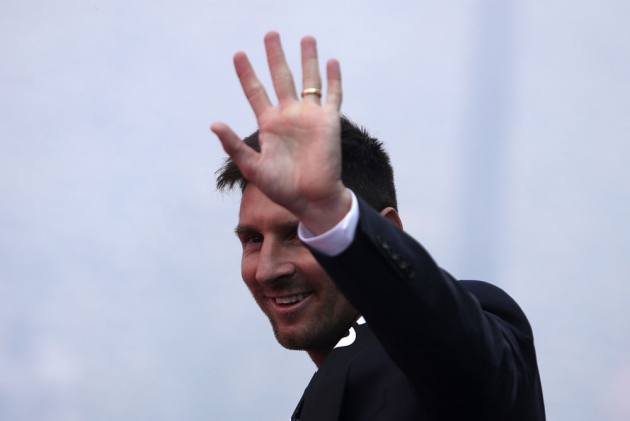 The 34-year-old Argentina star had just returned from vacation when Barcelona announced it couldn't afford to keep him, opening the door for PSG. Messi is now under contract for at least two seasons in the French capital.

Messi told a news conference on Wednesday that it's up to PSG coach Mauricio Pochettino when he plays, but noted he's had “no real training sessions" for a month.

“I hope it will be as soon as possible,” he said.

“I can't give you a date. It will depend on the training and how it feels and when the coaches think I'm ready.”

After spending his career at Barcelona, Messi said he's looking forward to “discovering new teams and new stadiums” in Ligue 1.

The wait is on. Meanwhile, the French league season enters its second round this weekend.

Messi's new team hosts Strasbourg on Saturday night at Parc des Princes stadium. Messi is expected to be presented to the 50,000 faithful before kickoff.

Pochettino wasn't happy with his team's defending last week but Strasbourg doesn't figure to be a roadblock for a PSG team intent on reclaiming the French title this season.

The second round begins Friday when Lorient hosts Monaco, which was held 1-1 by Nantes last week.

Monaco midfielder Aleksandr Golovin will be available after exiting Tuesday night's game against Sparta Prague with an ankle problem. The Russia international had scored in the 3-1 victory in Champions League qualifying.

“Aleksandr is in good shape and will be available against Lorient,” Monaco coach Niko Kovac told reporters Thursday.

Kovac will need to manage minutes, however, with Monaco facing Shakhtar Donetsk on Tuesday in the Champions League playoffs.

“It's important to make changes during the game,” Kovac said of the Lorient clash.

“There's a difference when a player plays 60 minutes or 90 minutes. I need to give minutes to all the players and allow them to recover.”

Monaco captain Wissam Ben Yedder will be looking for his first goal of the season after netting 22 in the last campaign.

Defending champion Lille on Saturday faces former coach Christophe Galtier, who stepped down days after raising the trophy to eventually take over at Nice. Both teams drew last week.

Marseille plays its home opener against Bordeaux on Sunday night after a 3-2 comeback victory last week at Montpellier. Marseille trailed 2-0 in the second half before the comeback, with playmaker Dimitri Payet netting the final two goals. American winger Konrad de la Fuente had set up Cengiz Under for the first.