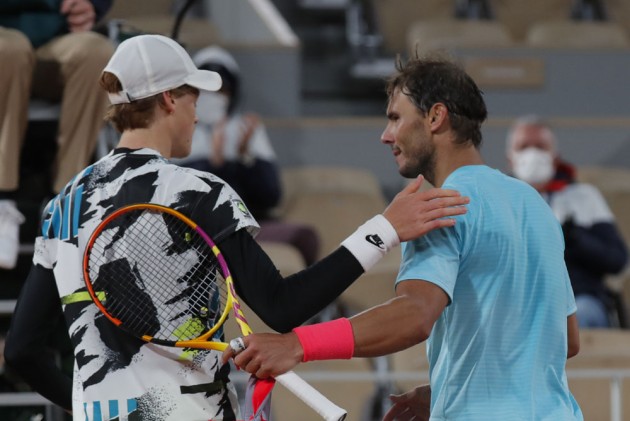 The 12-time French Open champion had dropped only 23 games through four matches at Roland Garros, but the Spaniard was given his sternest test yet by the unseeded Italian in a 7-6 (7-4) 6-4 6-1 victory.

The 19-year-old Sinner was serving to take the opening set after breaking Nadal’s serve to go 6-5 up, until the three-time defending champion earned his first break points to come back from the brink and level up.

Nadal powered through the tie-break to take the first set in an hour and 17 minutes, but world number 75 Sinner regained his composure as the clock ticked past midnight local time during the second set.

Sinner claimed the second of two break points to force a 3-1 lead, but once again the Italian could not consolidate as Nadal hit straight back and then edged 5-4 ahead before serving out the set.

This was the first time the highly rated Sinner has gone beyond the second round of a major, and the contest began to slip away when Nadal, playing his 100th French Open encounter, broke in the opening game of the third set.

Sinner became the first debutant to advance to the men's quarter-finals at Roland Garros since his opponent in 2005, but his journey would end as Nadal controlled the final set to claim victory at 1:26am local time.

He's even got jokes. There's nothing he can't do @RafaelNadal #RolandGarros pic.twitter.com/Y9E7OcVS4g

Nadal has not lost a single set yet at Roland Garros in 2020 but this was hardly straightforward. Sinner became the first player to take five games off Nadal in an opening set at Roland Garros since his next opponent, Schwartzman, did back in 2018, and it took six games before Nadal was able to earn his first break point.