Roger Federer withdrew from the French Open on Sunday, and Alejandro Davidovich Fokina is a surprise name in the last eight 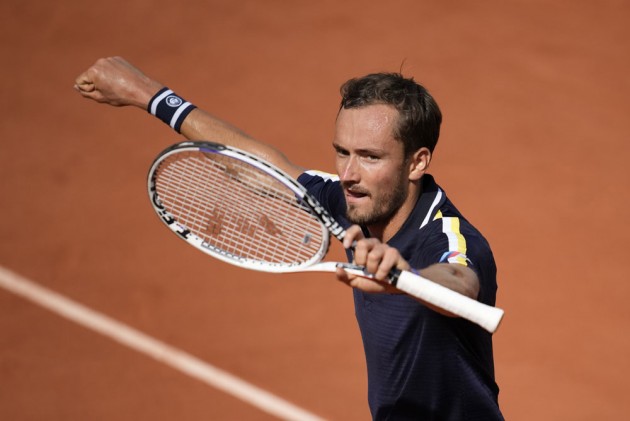 Daniil Medvedev and Stefanos Tsitsipas set up a blockbuster French Open quarter-final as both powered to crushing wins on Sunday. (More Tennis News)

Once considered a clay-court dud after failing to win a match in his first four Roland Garros visits, second seed Medvedev's first run through the rounds continued as he saw off Cristian Garin 6-2 6-1 7-5.

Alejandro Davidovich Fokina reached the last eight of a grand slam for the first time and will face Alexander Zverev.

The 22-year-old's next assignment will be a last-eight meeting with Zverev, who beat Kei Nishikori 6-4 6-1 6-1 in the final match of the day.

Roger Federer's race in Paris this year is run, however.

Federer will turn his attention to the grass-court season after pulling out following his win over Dominik Koepfer in the early hours of Sunday morning, stating that he does not want to take any risks after undergoing knee surgery twice.

A First for Foki

@alexdavidovich1 books his Grand Slam QF debut with a 6-4, 6-4, 4-6, 6-4 win over Delbonis. He’ll face the winner of Zverev/Nishikori. #RolandGarros pic.twitter.com/yK4eIAyjT4

Davidovich Fokina is one of an exciting young crop of players to look out for. The world number 46 reached the fourth round of the US Open last September and will get an opportunity to gain revenge on the man who beat him at Flushing Meadows.

Zverev lost only five games in that one-sided meeting in New York and the sixth seed from Germany will be expected to get the better of Davidovich Fokina again.

Davidovich Fokina, who celebrated his birthday on Saturday, struck 42 winners and broke Delbonis seven times to set up another clash with Zverev.

Medvedev seizing the day on clay

Russian Medvedev had made no secret that he has not been a fan of playing on clay in the past, but he has enjoyed himself on the surface in the past week.

Medvedev, who is closing in on replacing Novak Djokovic at the top of the rankings, hit 46 winners as he marched into the quarter-finals.

He said: "I hope that I can come here many years in a row, make great results, maybe win it one day.

"That's definitely a better feeling than losing the first round. It's not a good feeling. I hope it's going to be better with every year."

@DaniilMedwed powers past Garin 6-2, 6-1, 7-5 to reach the quarter-finals at #RolandGarros pic.twitter.com/GCNQVPtPVg

The 22-year-old Greek, who struck 41 winners in a dominant display and was broken only once, is embracing the challenge of trying to be a regular fixture in the latter stages of majors.

He said: "In grand slams, it's all about the endurance and being able to show up and do your job once every two days and do it well. Of course, you have to show up for work every single day, whether that's a practice or a match.

"It's demanding. It takes a lot of attention, a lot of effort. I've actually grown into loving that process and wanting to repeat that. It's a process that can be very demanding, but that's what our sport is all about. That's what makes our sport so spectacular."