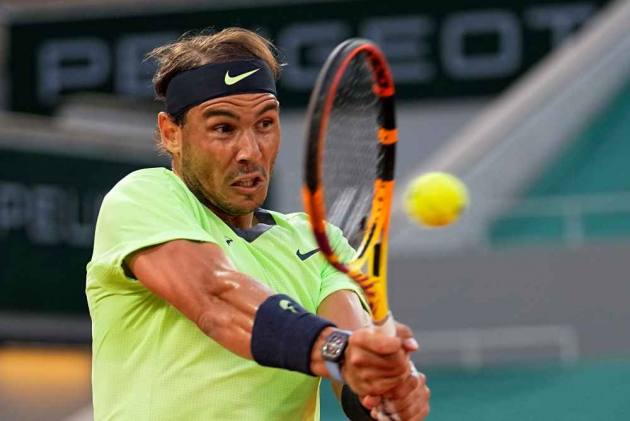 Rafael Nadal stormed into the third round of the French Open with a straight-sets defeat of Richard Gasquet under the floodlights in Paris. (More Sports News)

Gasquet, the final French player in either the men's or women's draws, offered some resistance after a terrible start but succumbed 6-0 7-5 6-2 in two hours and 14 minutes.

Nadal has now beaten Gasquet in all 17 of their meetings on Tour, with the Frenchman falling to a Spaniard for the second tournament running, having lost 6-1 6-1 to Jaume Munar in Parma last month.

The 20-time major singles champion turned 35 on Thursday and seemed eager to go and enjoy what remained of his birthday as he reeled off the first seven games in a row inside half an hour.

Gasquet at last got on the board after a couple of strangely errant forehands from the defending champion, who broke Gasquet again at the third time of asking as he moved 4-1 ahead in the second set.

Gasquet might have dropped to 53 in the rankings, but he offered glimpses of the form that saw him climb as high as seven in the world back in 2008, the one-handed backhand and drop-shot game causing Nadal some problems.

There was a shock when he broke back at 4-5 behind in the second set as Nadal looped another forehand long, but Nadal piled on the pressure at 6-5 and took a 2-0 lead when Gasquet slapped a forehand into the bottom of the net.

A sublime volley and a rasping passing shot saw Gasquet fend off two more break points at 1-2 in the third, but his resistance was finally broken in a mammoth sixth game.

Gasquet's serve deserted him at the wrong moment as he handed Nadal two match points, the second of which was taken via another forehand into the net.

Nadal dropped just seven of 45 points behind his first serve, which averaged speeds of 180km/h, leaving Gasquet with few opportunities to knock the Spaniard off his game.

Such authority meant Gasquet had little chance of snapping his losing streak against Nadal, whose 17 wins from 17 meetings is a career record.