South Africa captain Dean Elgar seemed to have benefitted from a controversial DRS call in the 21st over on Day 3 of the third Test against India. Virat Kohli was left fuming by the incident. 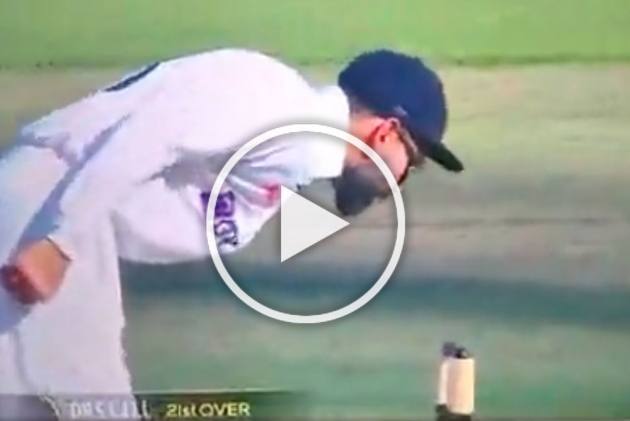 Well, Virat Kohli was being himself. Known for his animated expressions, the India captain found a new way to show his disappointment on Day 3 of the series-deciding third Test match against South Africa at Newlands, Cape Town Thursday.

India, chasing their maiden Test series win in South Africa, were dismissed for a paltry 198 in the second innings. And the visitors needed early wickets to defend 212 against the Proteas. Mohammed Shami did provide an early wicket, in the 8th over by removing Aiden Markram (16 off 22).

But Dean Elgar (30 off 96) found a perfect partner in Keegan Petersen (48 not out off 61) as they added 78 runs in 134 balls for the second wicket, before the dismissal of South Africa captain by Jasprit Bumrah at the stroke of stumps.

Elgar, who anchored South Africa's chase in the second Test, also seemed to have benefitted from a controversial DRS call in the 21st over, bowled by Ravichandran Ashwin.

Umpire Marais Erasmus and Indian players were confident that the offie had trapped Elgar in front, but the replays showed the ball bouncing over the wicket.

Initially, it looked so dead that Elgar had indeed started walking. But tech saved him, to the chagrin of Indians.

What followed was Kohli addressing the issue, in his own style. He kicked the ground in disgust and then spoke to the stump microphone. Another Indian player was heard saying, "Whole country is against eleven players." Another one added, "broadcasters are here to make money boys".

Before Kohli, a frustrated Ashwin was also seen speaking to the stump mic.

Here are some footages:

Virat Kohli speaking right into the stump mic indicating that the DRS is definitely rigged to favour South Africa.

How he's allowed to do this? No warning as yet. #SAvsINDpic.twitter.com/WE4yOlmuYV

"You know how they say technology is 98% accurate. Well today we saw the other 1%," he wrote in a Twitter post.

You know how they say technology is 99% accurate. Well today we saw the other 1%. #SAvIND pic.twitter.com/v9BvpGP8TL