Playing in his maiden Test series, Siraj grabbed 5 for 73 in the Australian second innings on Monday. 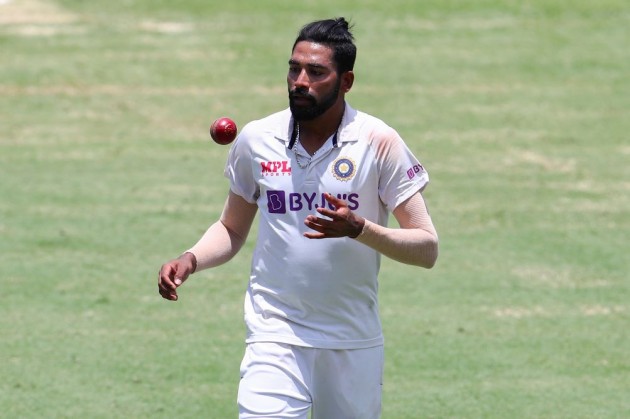 An emotional Mohammed Siraj struggled to describe his maiden five-wicket haul in words but sounded a word of caution about the cracks on the Gabba surface creating confusion in the Indian batsmen's minds on the final day of fourth Test.

Playing in his maiden Test series, Siraj grabbed 5 for 73 in the Australian second innings on Monday.

He believed that there are a few spots on the surface, from where the ball might rear up awkwardly when his team sets out to chase a record target of 328 on Tuesday to win the four-match series against Australia.

"When they bowl, obviously there will be some confusion, it will play in the mind of the batsmen that there are cracks on the pitch but our batsmen are prepared for this. We will come to know only tomorrow," Siraj said at a virtual press conference.

When he was asked if he would be required in pursuit of the total, he replied: "If I get opportunity, then I will bat."

"... But naturally our aim is to win this series, especially after so many injuries, despite which our team fought hard in the first innings," he said.

The short ball to get rid of Steve Smith was his favourite among the 13 wickets in the series, along with the dismissal of Marnus Labuschagne.

"In the whole series, I feel it would be Steve Smith's wicket, there was extra bounce from the area where I thought I will get it. He is the best batsmen in the world and it gave me a lot of confidence, also the wicket of Marnus (Labuschagne), it boosted my confidence."

"Also the kind of opportunities that the youngsters got, whether it is Natarajan or Washington, all have grabbed them, every one has performance.

"I will especially thank Ajinkya Rahane for trusting the youngsters and showing confidence in me, he was talking me all the time and it gave me a lot of confidence."

Having lost his father during the ongoing tour and being unable to go back for his last rites, Siraj had a difficult last two months but in the end, the hard work has reaped dividends.

"My dad had wished that his son would play and the entire world would watch him. I hope he could have been there to watch this day. This is because of his blessings that I have got a five wicket haul in Tests. I am speechless and can't express my feelings in words."

"It was a tough situation, dad's demise. I got strength after talking to mom and my focus was to realise dad's dream," he said.

During the series in which all senior pacers pulled out due to injury or fitness issues, Siraj has bowled 134 plus overs in three Test matches.

"I would give credit to one of our trainers, Sohum bhai (Desai) created a programme for me and was after me, checked my protein intake (he has cut down on biryani), training and fitness lockdown," he said.

"He was helping me since lockdown and I followed his programme. Test cricket demands different kind of fitness."

He led the Indian attack after playing in a mere two Test matches and his experience for India A has helped him a lot.

"I don't consider myself as a senior bowler but since I have played a lot domestic and India A, it helped. I missed Jassi bhai (Jasprit Bumrah). So I had to take more responsibility and build pressure and don't try too many things."

"You set up the batsman by first bowling a series of inswings followed by an outswing, after that 1-2 over bowled on same channel, and then change the line. The idea is to keep on building pressure," he said.