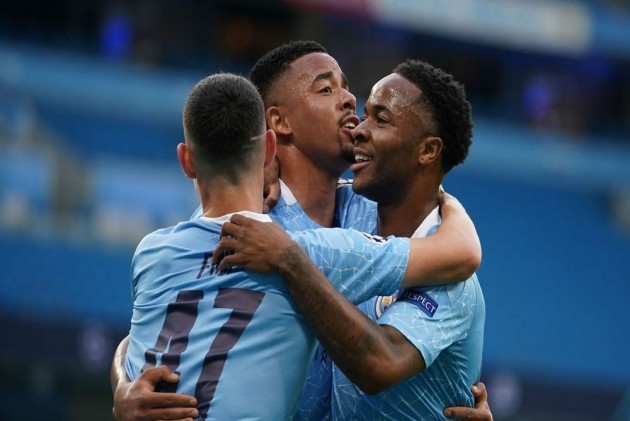 Manchester City had Gabriel Jesus to thank for their Champions League triumph over Real Madrid, according to manager Pep Guardiola.

Brazil forward Jesus headed in City's equaliser in a 2-1 win at the Santiago Bernabeu in February before drawing the foul that saw Madrid's influential captain Sergio Ramos sent off.

The 23-year-old was to the fore once more at the Etihad Stadium on Friday as City won by the same scoreline to secure a quarter-final meeting with Lyon in Lisbon next weekend.

Starting, as he did in the Spanish capital, on the left of City's attack, he forced a mistake from Raphael Varane to set up Raheem Sterling's early opener.

Karim Benzema levelled for Madrid but, in Ramos' absence, Varane cut a forlorn figure and a second misjudgement allowed Jesus to dispatch an excellent 68th-minute finish and put the outcome beyond doubt.

"This competition punishes you [for mistakes], we know through our own experience. But I think Gabriel made his contribution to this," Guardiola told a post-match news conference.

"He is the best guy making this kind of action, for the intuition and aggression.

"I think Gabriel was the man of these two games. He scored in Madrid, he provoked the red card and today he made the assist first and scored a goal.

"He was so decisive for us, helped by the whole team – the way we fought and suffered in the bad moments."

Jesus has 23 goals in all competitions this season, his most prolific in City colours.

His starting berth still arguably owed much to Sergio Aguero's injury absence, but Guardiola observed an individual performance that can help a player who sometimes appears brittle in terms of confidence to grow in stature.

THE BOY FROM BRAZIL WITH ANOTHER PICK POCKET YYYEEEEEEEEEEWSSSSSSSSS!!!!

"Gabriel always helps us more than the goals but for the strikers it is important to score," he said. "For the big, big players on the biggest stages in the biggest games.

"In this competition, against the kings of the competition, he showed it twice. I think he made an incredible step forward to say 'here I am and I can win games for myself'."

Facing a team who finished the truncated Ligue 1 season in seventh position could be viewed as a favourable draw, but Guardiola baulked at the suggestion this might be his best chance to win the Champions League with City.

"All the teams who will be there will think the same, why are we so special? I don’t see one reason why," he said, before noting his team only took a point from two Champions League group-stage encounters with Lyon last season.

"To win the Champions League you have to beat a lot of teams the quality of Real Madrid.

"Last season we played against Lyon and we lost and we drew. We could not beat them. That is the reality. Rudi Garcia, I know very well the quality of this manager."