Lionel Messi scored twice as Barcelona won 3-2 at Valencia on Sunday, with Gerard Pique backing them to prevail in LaLiga's title race 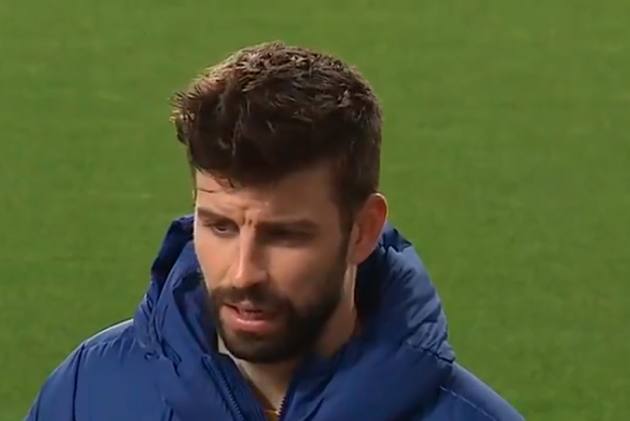 Gerard Pique predicted there will be major twists to come in LaLiga's title race after Barcelona beat Valencia 3-2 to crank up the pressure on Real Madrid and Atletico Madrid. (More Football News)

The Barcelona defensive stalwart said there is a determination within Ronald Koeman's squad to secure a league and cup double after already securing the Copa del Rey title.

Pique believes that would be a major statement by the current set of players, but it will take a big effort from Barcelona, who must face leaders Atletico at Camp Nou this coming Saturday.

Atletico hold a two-point advantage over Barcelona going into that game, while Real Madrid are also two points back from their city rivals. Sevilla, too, are clinging to the hope of fighting their way past the big three to snatch only their second Spanish league title. Sevilla and Madrid face each other next Sunday.

"We hope to be leaders after the next match day, but even if we are leaders, I would not put my hand in the fire that whoever comes out leader will win LaLiga," Pique told Movistar Plus.

He added: "It is not in our hands, but I think that if we win the four games that remain, we have many chances to win LaLiga. It would be a shame if after the effort we made in this second half of the season we wouldn't end up fighting for LaLiga until the end."

Lionel Messi's double strike took his haul to 28 goals in LaLiga this season, and it came despite him missing a penalty when Barcelona were 1-0 behind, just as he also did in the home game against Valencia in December.

50 - Lionel Messi  has scored his 50th direct free kick goal in all competitions for @FCBarcelona, the first one vs Valencia. Specialist#valenciabarca #LionelMessi pic.twitter.com/QqVKEgkI0I

As in that first match, Messi made amends by finding the net just seconds after failing from the spot.

Whereas Barcelona could only draw 2-2 at Camp Nou, in this Mestalla clash Messi's equaliser was the cue for a flurry of goals for the Blaugrana, with Antoine Griezmann prodding them ahead. Messi curled a stunning free-kick in off the right post to make it 3-1, before Carlos Soler hit a brilliant consolation for Valencia.

Messi's second goal was the 50th direct free-kick he has scored in his Barcelona career, with 39 of those coming in LaLiga, five in the Champions League, three in the Copa del Rey, two in the UEFA Super Cup and one in the Supercopa de Espana.

The penalty miss, meanwhile, signalled the first time that Messi has missed consecutive spot-kicks for Barcelona in all competitions, after previously failing to convert against Paris Saint-Germain in the Champions League.

Pique acknowledged Barcelona "had to suffer a little" after Soler's strike ramped up the pressure in the closing minutes.

Pique added: "We've shown ourselves and our fans that we want this league title. Winning the Copa was a first step, but we now want LaLiga. It would be a great message for this season and next season."