RB Leipzig are on the front line of the latest wave of the pandemic in Germany in the eastern state of Saxony, where infection rates are the highest and vaccination rates the lowest compared to other regions. 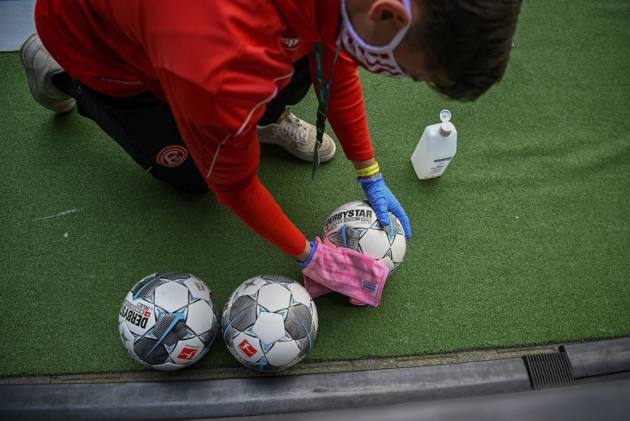 Leipzig in empty stadium as virus bites back in Bundesliga German soccer fans thought they'd put the days of empty stadiums behind them, but the coronavirus pandemic isn't letting up. (More Football News)

Record case numbers in Germany mean one top club is back playing without a crowd and others will have thousands of fewer fans this weekend.

Leipzig is on the front line of the latest wave of the pandemic in Germany in the eastern state of Saxony, where infection rates are the highest and vaccination rates the lowest compared to other regions. With intensive care facilities under strain, state authorities have banned crowds from sports events.

That means Leipzig will host the Bundesliga's first game in an empty stadium for months when Bayer Leverkusen visits on Sunday. That also affects its Champions League game against Manchester City next month.

Clubs in other states are increasingly under restrictions, too. Bayern Munich can fill its stadium to only 25% capacity against Arminia Bielefeld on Saturday.

Just a month ago, the picture was very different.

Germany's vaccination program was going well and entry rules for games — generally restricted to people who were fully vaccinated, recently recovered from the virus or with a negative test — were being broadly obeyed. Bayern celebrated having a full house of 75,000 for the first time since March 2020 on Oct. 23 when it played Hoffenheim.

Since then, case numbers have continued to hit record levels in German society, and soccer has not escaped.

Leipzig coach Jesse Marsch and goalkeeper Peter Gulasci won't be at their empty-stadium game against Leverkusen because the club said this week they tested positive. Of the four German clubs playing in the Champions League this week, all were missing at least one player with a positive test.

Leipzig shrugged off the disruption in a 5-0 demolition of Belgian club Brugge on Wednesday, but questions remain over the future of Marsch with the club seventh on the Bundesliga table and unable to qualify for the Champions League knockout rounds.

Bayern's reduced crowd will see the team attempt to bounce back from a shock 2-1 loss at Augsburg last week which reduced the title lead to just one point.

A threadbare Bayern squad clung on to beat Dynamo Kyiv 2-1 on Tuesday but virus cases and injuries mean coach Julian Nagelsmann has few tactical options and can't rest key players. Against that backdrop, even relegation-threatened Bielefeld becomes a trickier opponent.

Bayern's woes deepened on Wednesday when midfielder Joshua Kimmich and backup striker Eric Maxim Choupo-Moting tested positive for the coronavirus. Kimmich became the face of Germany's debate over vaccine hesitancy last month, and a political talking point in parliament, when he said in a TV interview he wasn't vaccinated and had reservations about vaccines against the virus.

Other clubs are on a collision course with their own players.

Starting this month, German employers are no longer obliged to pay workers during their quarantine period if they're unvaccinated and identified as a close contact of someone who tested positive. Several clubs have said they'll follow this policy and Bayern has been widely reported to be considering this approach.

Elsewhere this weekend, Borussia Dortmund takes on Wolfsburg in a game between teams having similar weeks. Both lost in the Champions League midweek — eliminating Dortmund and leaving Wolfsburg unlikely to qualify — and both are without key players who tested positive for the virus after returning from the Belgian national team.

In Dortmund's case, it's forward Thorgan Hazard, who had been crucial during Erling Haaland's injury absence, while Wolfsburg is missing goalkeeper Koen Casteels.

Third-placed Freiburg surprised many by staying in the Champions League places after a strong start to the season but it's on the slide after losing two in a row. A visit to promoted Bochum offers a chance to turn things around.