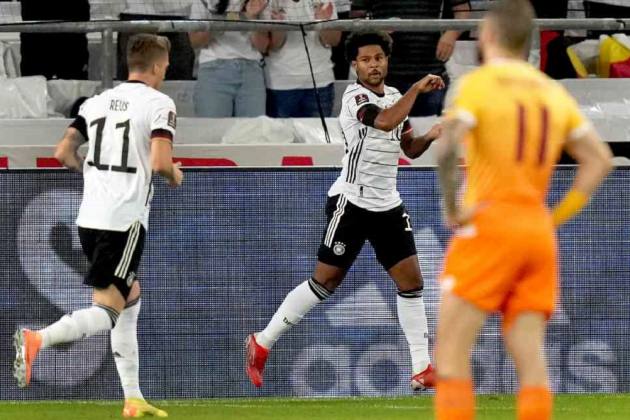 Serge Gnabry scored twice and Salzburg forward Karim Adeyemi completed the scoring after coming on a substitute for his Germany debut. Marco Reus, Timo Werner and Jonas Hofmann also scored as Germany produced a much-improved performance in comparison to the jaded 2-0 win over Liechtenstein on Thursday in Europe's Group J.

Flick, who took over from Joachim Löw after the European Championship, made six changes to the team that failed to shine against Liechtenstein, with captain Manuel Neuer back in goal after recovering from an ankle problem and Antonio Rüdiger, Leon Goretzka, Reus, Hofmann and Gnabry all starting on Sunday.

Neuer and Thomas Müller were both honored before the game for clocking up more than 100 appearances for Germany. Müller remained out with a thigh injury, however.

It was an emotional game for Armenia forward Sargis Adamyan, whose family moved to Germany when he was four. Adamyan plays for Bundesliga side Hoffenheim. Henrikh Mkhitaryan was another familiar face to German fans from his three seasons at Borussia Dortmund between 2013-16.

Thilo Kehrer struck the top of the crossbar in the fifth minute and Gnabry scored a minute later. Goretzka played the ball over the visitors' defensive line for his Bayern Munich teammate to run through and score from a difficult angle.

Goretzka fired over shortly afterward, and Leroy Sané drew a good save from David Yurchenko as the home team – playing with confidence – kept pushing for more.

Gnabry got his second goal in the 15th, smashing the ball in from Reus' cross after a good combination with Sané, who went on to strike the post in the 22nd.

Reus scored with a low shot in the 35th when Gnabry crossed and Werner laid the ball off for the Dortmund captain, and Werner got the fourth goal in the 44th in another goal set up by Goretzka.

Gnabry went close after the break but the fans didn't have long to wait for Hofmann to get the fifth in the 52nd.

Germany's intensity dropped as Flick made numerous changes. The 18-year-old Florian Wirtz, who made his debut against Liechtenstein, came on for his second appearance before Adeyemi and Hoffenheim defender David Raum came on for their debuts.

Wirtz crossed for Adeyemi to get the sixth goal in injury time.

Germany recovered from its surprise defeat at home to North Macedonia in March as it leads Group J with 12 points — two points ahead of previously unbeaten Armenia after five games played.

North Macedonia was held 2-2 by Iceland in Reykjavik earlier Sunday. Darko Churlinov was about to celebrate an injury-time winning goal for the visitors, but Iceland's Brynjar Ingi Bjarnason cleared off the line to save his team's point.