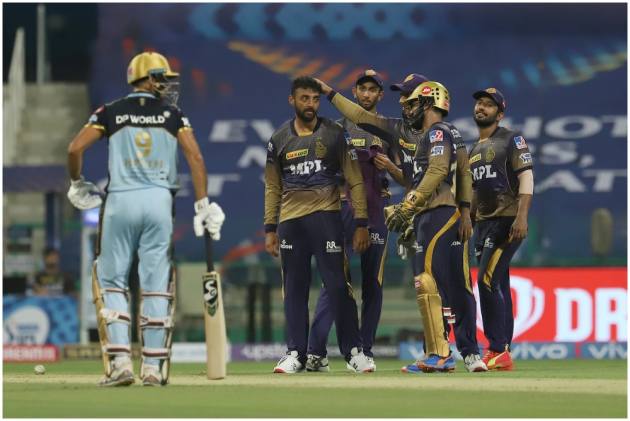 Asked to bowl first, KKR bundled out a star-studded RCB for a paltry 92 in 19 overs before overhauling the target with 10 overs to spare. Shubman Gill (48) and debutant Venkatesh Iyer (41 not out) looked good with the bat. The win put KKR to fifth spot with six points while RCB remain static at third. (POINTS TABLE)

“The timing of it (win) is excellent. The talent we have within our squad sometimes that counts for nothing. You have to go out there and show how good you are. Was 50-50 about the toss. Bowlers have had an outstanding day today,” Eoin Morgan said after the match.

Playing his 200th IPL game, RCB captain Virat Kohli had a bad day, losing his wicket in the second over itself. Although opener Devdutt Padikkal (22) tried to steady the ship, he was removed by KKR's Kiwi all-rounder Lockie Ferguson.

The turning point of the match came in the ninth over when Andre Russell’s double strike hit RCB hard. This included the big wicket of AB de Villiers for a duck. Glenn Maxwell too couldn’t contribute much.

“Maxwell, AB, Virat - we got on top of them which is fantastic and really rare. Have a long way to go. Need a lot of things to go right for us. Today was the perfect start. Maybe makes us a dangerous side - we haven't turned up in the tournament so far,” said the World Cup-winning England captain.

Mystery spinner Varun Chakravarthy, who finished with figures 3/13, including two in an over, said he is feeling better with his performance.

“It was flat (pitch) only. There wasn’t much in the pitch. Wasn’t much spin on offer so I had to keep it on the stumps. I thought it was out (the hat-trick ball) but just saw the replay that there was an inside edge. Started very late in my career. Now, me getting picked for India gives me a sense of acceptance,” said Chakravarthy, who was adjudged the Player of Match.