We have compiled a star-studded group of Gianluigi Buffon's former team-mates for a dream XI, featuring the likes of Fabio Cannavaro, Paolo Maldini and Cristiano Ronaldo 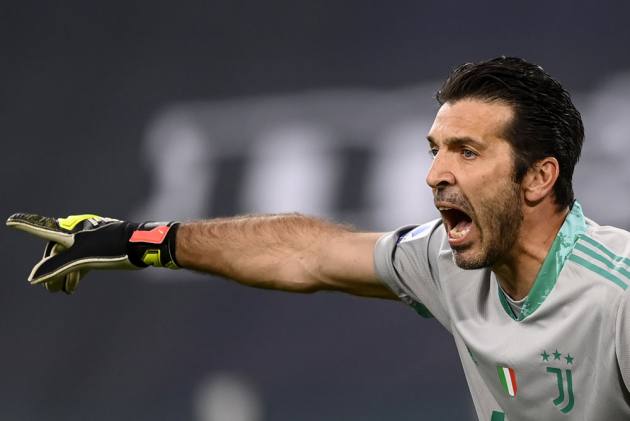 Gianluigi Buffon has called time on his second spell at Juventus, concluding a defining playing association with the Serie A giants. (More Football News)

There may only be three clubs on the goalkeeping great's resume but sustained excellence over more than two decades has filled his trophy cabinet with individual and team honours.

The former Parma prodigy has rubbed shoulders with the very best in world football throughout that time, forming part of Serie A, Ligue 1 and World Cup-winning sides.

In honour of Buffon's stellar career, we have compiled a star-studded group of former team-mates for a dream XI.

Who else has the pedigree to don the gloves in such a side?

A five-time member of the UEFA Team of the Year, he boasts more Serie A clean sheets than any other player and, as captain of his country from 2010 until his retirement in 2018, would have no trouble bringing this team together.

Having been joined by Buffon at Parma after his switch from Monaco in 1996, Thuram followed his team-mate in making the move to Turin ahead of the 2001-02 campaign.

The 142-time France international, part of the side that tasted glory at the 1998 World Cup on home soil and won Euro 2000, spent five seasons at Juve before rounding out his career with a spell at Barcelona.

Buffon's inheritance of the Italy armband from Cannavaro in 2010 completed the striking symmetry of their careers.

They both made their Parma debuts in 1995, did the same for Italy in 1997 and were reunited at club level when Cannavaro, one of few defenders to win the Ballon d'Or, joined Juve in 2004. They also lifted the World Cup together in 2006.

A long-time rival at club level, Nesta was part of the famous Milan defence that beat Juve in the 2002-03 Champions League final – he scored his penalty against Buffon in a 3-2 shoot-out victory – and triumphed again four seasons later.

He was named in the Team of the Tournament at Euro 2000, which Buffon missed through injury, but the 2006 World Cup success will undoubtedly be the highlight of his career.

With admirable longevity, loyalty and leadership, classy defender Maldini set the path that Buffon has so impressively followed.

The long-time Rossoneri skipper, a seven-time Scudetto winner who also lifted the European Cup on five occasions, Maldini was the only player to have managed more Serie A appearances than the veteran keeper until his Juve return.

Has there been a more iconic duo of the modern era?

Pirlo was already at the top by the time he swapped Milan for Juve, but he saved plenty of his play-making brilliance for Buffon and friends as the Bianconeri re-asserted themselves as Italy's top club with a run of successive Scudetti that stretched to nine before being ended by Inter this season as their reunion as player and head coach did not yield similar results.

Nedved's blend of athleticism, tenacity and well-rounded technical ability made him close to the complete midfielder.

He helped Czech Republic to the final of Euro 1996 and his value to Juve was summed up by a Ballon d'Or victory in 2003.

Less than two years after a 17-year-old Buffon held Baggio and Milan scoreless on his senior debut for Parma, the pair were sharing the same shirt for Italy.

Two of the Azzurri's greatest were in the same squad at the 1998 World Cup, although Buffon would ultimately go one better than the 1993 Ballon d'Or winner, who suffered final heartache against Brazil at USA 94.

He stands as an equal in the pantheon of Juve luminaries.

Buffon and the majestic Del Piero combined to help the Bianconeri finish top of Serie A on five occasions, while they lined up for Italy together for over a decade and experienced World Cup glory together

Ronaldo joined Juve as Buffon embarked upon his hiatus with Paris Saint-Germain. The five-time Ballon d'Or winner was supposed to add Champions League glory to domestic dominance and now Juventus have neither.

Nevertheless, Ronaldo's individual form has remained imperious. In 127 appearances for the Bianconceri, he has 97 goals at a rate of a goal every 113 minutes.

They were only together for a year but the France phenomenon is a performer to compare with many of the greats to have shared a dressing room with Buffon.