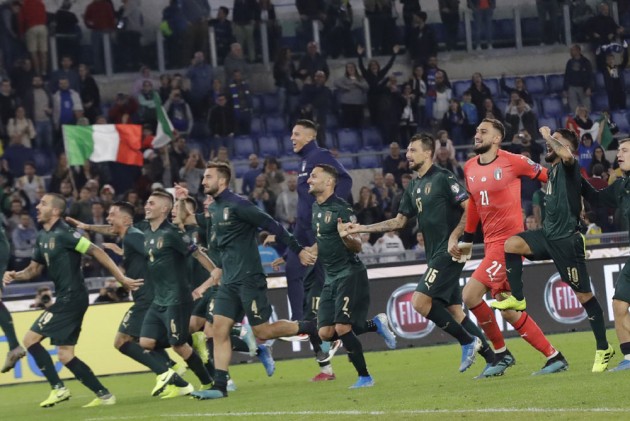 Italy went into the match at Rome's Stadio Olimpico having won each of their first six Group J matches and knew another victory would confirm their participation in next year's tournament.

It was by no means plain-sailing against a Greece side who set up to frustrate Italy, with Mancini's side barely troubling the visitors' defence in the first half.

But Andreas Bouchalakis blocked a Lorenzo Insigne shot with his arm just past the hour and Jorginho dispatched the penalty, before Federico Bernardeschi's late strike wrapped the win up.

And Donnarumma applauded the impact of Mancini, who has restored pride to Italy after they failed to qualify for the 2018 World Cup.

Scenes of celebration from the #Azzurri dressing room after qualifying for #Euro2020 with three games to spare!!
The #European Championship kicks off on 12 June in #Rome!#VivoAzzurro #ItalyGreece #ITAGRE pic.twitter.com/8jcBs3Sf9F

"He is a great coach, we listen to him," Donnarumma told Rai Sport. "He has good principles.

"We all listen to him and we must do that also during the Euros because he will surely lead us on the right track."

Victory over Greece was Mancini's eighth successive win, meaning he could equal Italy's all-time record of consecutive triumphs against Liechtenstein on Tuesday.

But Mancini dismissed the importance of that, highlighting the coach who set the record – Vittorio Pozzo – has an altogether more impressive legacy.

"Pozzo is a legend because he won two World Cups, the rest does not count," Mancini added.

"We hope the magical nights return and that in June it's even more beautiful."