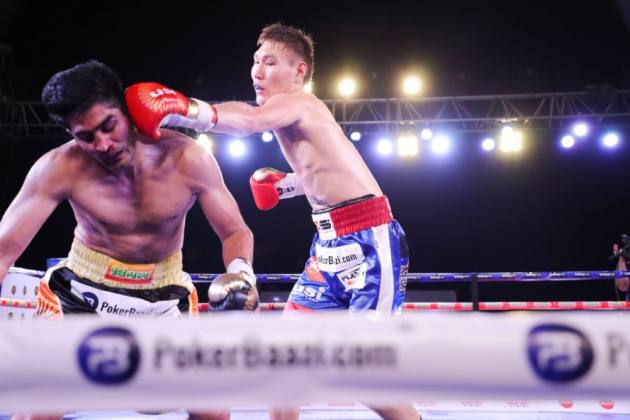 Russian boxer Artysh Lopsan, who ended star pugilist Vijender Singh's unbeaten run in the professional circuit, said he was glad to become the first person to stop the Indian's juggernaut.

In a major anti-climax, the 26-year-old six feet four inches tall pugilist out-slugged Vijender in the 'Battle on Ship' here on Friday evening and the bout was decided in the fifth round itself, ending in a knockout.

"My strategy worked against Vijender, he is a good fighter. I want to thank everyone who arranged this bout, it was a wonderful experience. I'm glad to become the first one to break the unbeaten record of Vijender Singh," Lopsan said after the fight.

Though dejected, Vijender put up a brave face, saying he would come back stronger.

"It was a good fight. He is a young and strong fighter," said Vijender, a 2008 Beijing Olympics bronze medallist.

"Winning and losing is part of the game. It was just not my day. I always believe in working hard and I'm sure I'll make a strong comeback to the ring soon," the boxer from Bhiwani said.

Vijender, a bronze medallist at the 2008 Beijing Olympic Games and who had turned professional in 2015, entered the bout with a 12-0 record.

In the co-main event, seasoned campaigner and pugilist Neeraj Goyat defeated his rival Sandeep Kumar in the welterweight division by a knockout. In the other fights of the evening, Chennai's Sabari J out-punched Amey Kalambe 60-54 in the lightweight category. Then Haryana's Kuldeep Dhanda suffered at the hands of Digari Mahesh from Uttarakhand in the super lightweight category.

Dharmendra Grewal was declared as the unanimous winner against Ashish Ahalawat in the cruiserweight category.