Maxwell smashed three fours and two sixes in his 25-ball 40 but he was undone by a Williamson throw as RCB lost by four runs against SRH. 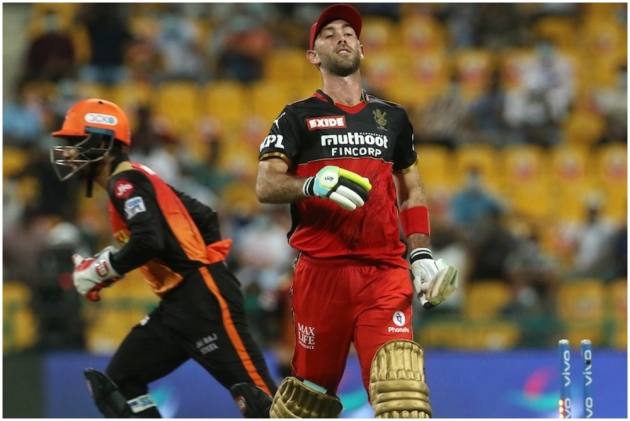 Australian allrounder Glenn Maxwell was scoring at a good pace and his run-out was probably the turning point of their match against Sunrisers Hyderabad (SRH), said Royal Challengers Bangalore (RCB) Director of Cricket Operations Mike Hesson.

Maxwell smashed three fours and two sixes in his quickfire 25-ball 40 to keep RCB in the hunt but he was run-out due to a poor call by opener Devdutt Padikkal in the 15th over. RCB’s chase derailed after that as they ended with 137/6 in their 20 overs for a narrow four-run loss. SRH had posted 141/7.

“...the fact that Glenn was scoring at a rate of over 10 an over, he is probably the only batsman who really had fluency on the surface and he was set, so he was probably the man we wanted at the crease, so look it probably was,” Hesson said when asked if Maxwell’s run-out was the turning point.

It was SRH skipper Kane Williamson, who produced the sensational effort while fielding at cover. He collected the ball quickly and hit the bull's eye while still in motion as Maxwell was way short of the crease.

“An exceptional piece of work in terms of that run out and yeah probably did turn the game,” said Hesson, who has coached New Zealand in the past, at the post-match press conference. “We just left a little-bit too much for us to do at the end. We weren't quite good enough for those key moments to get over the line.”

Another highlight of the game was the bowling by rookie SRH pacer Urman Malik, who hails from Jammu and Kashmir. Asked how did RCB prepare for Malik, Hesson said, “We looked at his pitch maps and in terms of, we know he bowls good pace, what sort of lengths and the general areas he looks to bowl, he tends to bowl hard length, so that was pretty clear in terms of what we were expecting today.

“Looks like he has got a good bouncer. He is a very promising bowler. In terms of preparation, it is more about watching a bit of footage, looking at the pitch maps and then making that adjustment to the surface out there.”

Sunrisers Hyderabad all-rounder Jason Holder also lavished praise on Malik, who was constantly hitting the 150 kmph mark. “I think, the first thing to mention is his pace, that's his asset. He is just consistent in training and given us quite a hard time, he is very hard to get hold of.

“It is good to see his control as well. He is being pretty consistent and he has grouped really good deliveries together.” Holder also said dismissing Virat Kohli in the first over was also a plus for his side. “You have got your best bowler in the world in Rashid Khan to match-up against their best batters, we got Virat (Kohli) in the first over, which was very crucial.

“We know what type of player he is, so to get him out pretty early was a plus for us and it put pressure on them,” said the West Indian. Sunrisers Hyderabad will play their final match of the competition against Mumbai Indians on Friday.