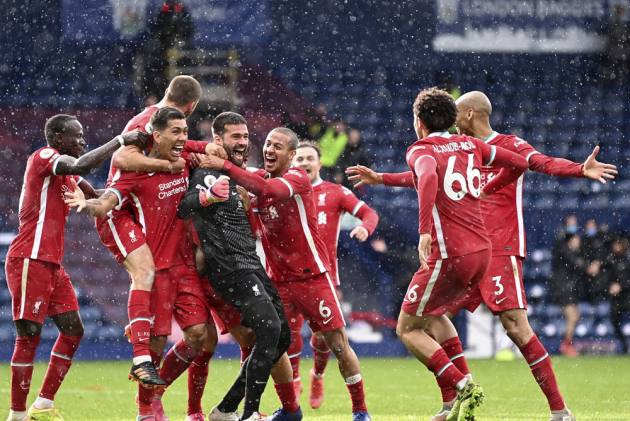 Alisson rose highest to nod home a Trent Alexander-Arnold corner at the death at the Hawthorns and put the pressure firmly back on Leicester City and Chelsea in the top-four race.

Earlier, Hal Robson-Kanu had put the Baggies in front before Mohamed Salah drew the visitors level with a fine finish from distance.

And, just when it looked like a place in Europe's top competition was slipping away from the Reds, the unlikeliest of goalscorers popped up at a set-piece.

West Brom capitalised on Liverpool's inexperience at the back after just 15 minutes – confusion between Nat Phillips and Rhys Williams allowing Robson-Kanu in for a fine finish into the corner.

Their profligacy did not last, and it was no surprise to see them get back on level terms through the prolific Salah, who curled a powerful first-time finish into the bottom-left corner.

Roberto Firmino hit the post when he might have done better moments later, but Liverpool were indebted to an Andy Robertson block straight after when Robson-Kanu found space again.

That ensured parity until the break, which was followed by Salah failing to take two good opportunities as he was crowded out in the box before being denied by Johnstone.

West Brom were unfortunate to see a Kyle Bartley finish from a knockdown ruled out after Matt Phillips strayed offside in front of the goalkeeper, and with almost the last action of the game, Liverpool made their luck count.

Having raced up to join the fray, Alisson was unmarked as he headed in Alexander-Arnold's corner, becoming the first ever Liverpool goalkeeper to score a competitive goal.

What does it mean? Reds back in charge

A draw in this fixture would have left Liverpool needing one of either Chelsea or Leicester City to drop points in both of their remaining games.

Now, after their 38th Premier League goal to come in or after the 90th minute, Liverpool are just one point behind Chelsea and can happily sit back and watch their two primary rivals go head-to-head on Tuesday evening, knowing their fate is in their own hands.

His goalkeeper will rightly get all the credit, but what about the role of Thiago Alcantara in this hard-fought victory? The Spaniard took more touches (120), completed more passes (96), and made more in the opposition half (77) than any other player on the pitch, while his passing accuracy of 90.6 per cent was better than any other outfielder who started the game.

After a somewhat indifferent first season in English football, Thiago is hitting form at a crucial time for the Reds.

Klopp might feel that Liverpool had enough promising moments to have the game wrapped up without the need for an injury-time winner.

Yet many of them broke down with Firmino, who lost possession 15 times and failed to get any of his three shots on target. With Diogo Jota out of action for the remainder of the season, the Brazilian is going to have to do more in the remaining two games.

- Liverpool have now won six of their last eight Premier League games (D2), the same number as they registered in their 19 top-flight games beforehand (W6 D5 L8).
- No player has scored more Premier League goals this season than Salah (22, level with Harry Kane). Indeed, those 22 goals have won the Reds 16 points.
- Salah's equaliser was his 125th goal for Liverpool since signing for the club ahead of the 2017-18 season, the most by any Premier League player across all competitions.
- Thiago created five opportunities from open play for his team-mates, the joint-most the Spaniard has ever managed in a top-flight league game.
- Alisson's goal (94:18) was Liverpool's latest Premier League winner since Christian Benteke vs Crystal Palace in March 2016 (95:10), while the Brazilian scored the very first headed goal by a goalkeeper since the formation of the competition in 1992.

Liverpool's next outing sees them travel to Burnley on Wednesday, while West Brom play their final home game ahead of a return to the Championship against West Ham United.