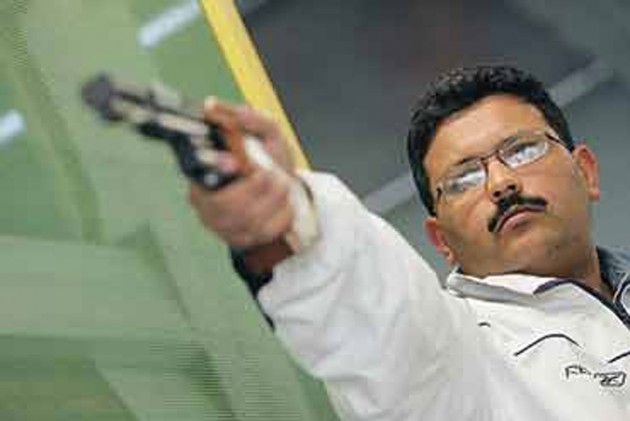 Champion shooter Samaresh Jung's fairly big house became his mini-hospital after he tested positive for COVID-19 along with five of his family members.

Pistols and all other accessories related to shooting were tucked away in one corner and in came strips of paracetamol, an oxygen monitoring machine and concentrator (a device which is used to deliver oxygen to patients with breathing related disorders).

And now, from sharing shooting tips, Jung has got down to spreading awareness about COVID-19, having beaten the dreaded disease with the same positive approach and determination that had helped him become a pistol ace and earned him the nickname 'Goldfinger'.

"Some dos and don'ts, you know, about whatever I know about the disease, and to whoever I know, I pass on my message," Jung told PTI during an interview.

A big house coupled with a good number of rooms and multiple toilets worked well for the champion shooter when he tested positive for COVID-19 along with five of his family members.

They underwent self-isolation at home till the concerned authorities gave them the clearance certificate on June 22.

The last few weeks have been tough for the 50-year-old pistol ace, who won a whopping seven medals, including two gold, at the 2006 Melbourne Commonwealth Games, a feat that earned him the best athlete award of that edition.

He is accustomed to facing challenges.

"But this was very different," Jung said.

"I would say don't panic to those diagnosed with COVID but, at the same time, we can't take it lightly. The feeling that we will not get the infection should not be there at all. You have to be extremely careful," he added.

Jung, now a coach of the national pistol team, said his aim was to stay away from negativity after he was told that he tested positive for COVID-19 on June 5, two days after giving his samples.

"So I decided to stay away from all these whatsapp messages and television. Though there were some tough days, I was determined to be positive all along," he said.

Employed with the Central Industrial Security Force (CISF), the son of a retired army officer said his initial symptoms were fever and cough, but he was a bit surprised as he would rarely venture out of his north Delhi residence, which housed 13 members at the time.

While four of the infected family members isolated themselves at home, two of them checked into a specific COVID facility.

"We had quite a few rooms and toilets which we could be used individually, with couple of them being used by those members who were not down with the virus.

"We were following the standard protocol and as part of it, there was also a COVID-19 poster pasted outside our house. Now that we are all clear I am waiting for the authorities to remove it."

"It wasn't easy but we had a few friends living nearby who would deliver us the medicines and groceries.

"I informed the CISF, their doctors were there and so were a couple of doctors who are like family friends," Jung, who is now a high performance pistol coach with the Indian team, said.