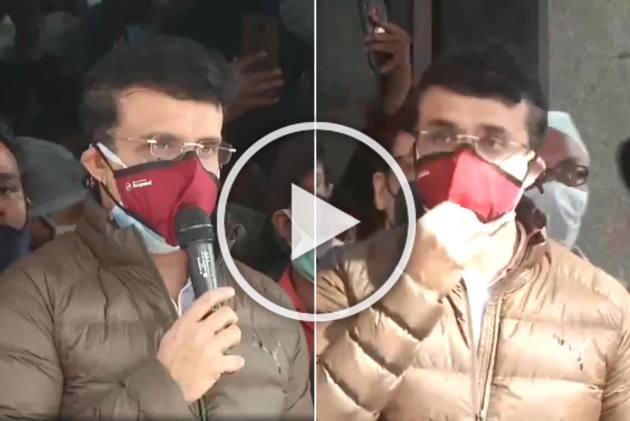 The Board of Control for Cricket in India (BCCI) president and former India captain Sourav Ganguly was on Thursday morning discharged from the Woodlands Hospital in Kolkata, five days after suffering a "mild heart attack". (More Cricket News)

"We come to hospitals to get our life back... I thank the Woodlands Hospital and all the doctors for the excellent care. I am absolutely fine. Hopefully, I will be ready to fly to soon," Ganguly said while briefly stopping to meet and greet the well-wishers and fans who have gathered at the hospital.

#WATCH | "I thank the doctors at the hospital for the treatment. I am absolutely fine," says BCCI President Sourav Ganguly after being discharged from Kolkata's Woodlands Hospital. pic.twitter.com/BUwsz5h1FQ

The hospital declared Ganguly 'clinically fit', but he will be monitored round the clock by the doctors and nurses.

World-renowned cardiac surgeon Dr Devi Shetty said that Ganguly didn't have any major problem and he "should go home and get back to work."

Ganguly, 48, had suffered a sudden blackout following mild chest pain during a workout session at his Behala residence on Saturday. He was then admitted to the hospital that day itself where he underwent angioplasty.

"This is the problem which most Indians experience at some point of their time. That is, the blockage in the coronary. Did he have heart damage? No. He had a blockage and he was getting some discomfort, but at the right time he landed in the right hospital and he had the right treatment. So, his heart is today as strong as it was when Sourav was 20 years old."

Highlighting the problem face by the majority of the Indians, Dr Shetty had also shared a message from Ganguly: "It doesn't matter how fit you are, unless you go through a preventive check-up at least once in a year or once in two years, none of us are spared from this episode."

A nine-member medical team was formed to look after Ganguly, and inputs were taken from doctors around the world.

"Sourav's incident has shaken the world. People think that a 48-year-old man, athletic like Sourav, who doesn't drink, doesn't smoke, has no vices, a fit man how can he ever develop heart attack? This is the true reality of India. The kind of lifestyle we live, irrespective of how strict with your lifestyle, irrespective of how athletic you are, you can still develop a heart attack if you don't undergo a preventive checkup at regular intervals," added Dr Shetty.

Giving further updates on Ganguly's health, he had said "with the right care he has received so far and the care he going to receive in the future, he's going to lead a normal life like anybody else. This event should not affect his lifestyle or lifespan."

During his stay at the hospital, 'Dada' was visited by various political leaders, including West Bengal Chief Minister Mamata Banerjee and Governor Jagdeep Dhankhar.

Prime Minister Narendra Modi and Home Minister Amit Shah had also called upon Ganguly and wished him a speedy recovery.