Marcus Rashford's 20th goal of the season gave Manchester United a 1-0 win over Granada in the first leg of their Europa League quarter-final tie. 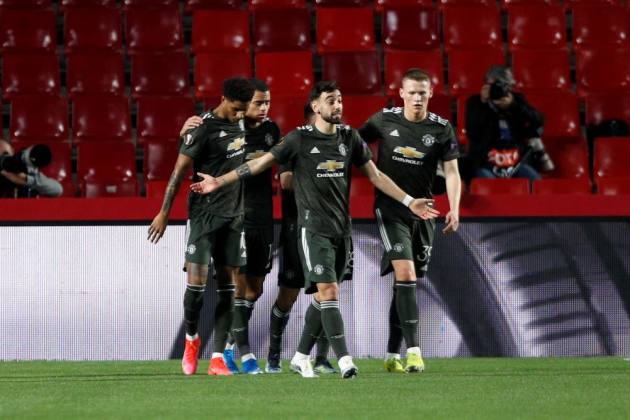 Marcus Rashford's 20th goal of the season helped Manchester United to a 2-0 win over Granada in the first leg of their Europa League quarter-final tie. (More Football News)

The forward's finish from a fine Victor Lindelof pass in the first half and a late penalty from Bruno Fernandes secured a commanding first-leg advantage in Thursday's clash at the Nuevo Los Carmenes.

Ole Gunnar Solskjaer's side were not particularly inspired in attack but rarely looked troubled by a team who have already eliminated Napoli in an impressive first European campaign.

Chelsea loanee Kenedy was a threat with shots from distance, but Diego Martinez's men were unable to create clear openings against a diligent Red Devils rearguard, particularly with only 33 per cent of the ball.

Rashford, who sustained an ankle problem in the win over Brighton and Hove Albion last Sunday, appeared to be struggling in the early exchanges as United made hard work of breaking down Granada.

The England forward looked fit and sharp 31 minutes in, though, latching onto Lindelof's long ball over the top before prodding a composed finish beyond goalkeeper Rui Silva.

The goal sparked a little life into Granada's attack, Kenedy's ambitious volley from the edge of the area giving the returning David de Gea something to do.

Kenedy twice tested De Gea again from outside the box after the restart but they were comfortable saves for the United keeper, who was otherwise mostly untroubled.

Fernandes had had a quiet game but he squeezed a mishit penalty under Silva's grasp to score a potentially decisive second away goal in the 90th minute after Yan Eteki was penalised for pushing a hand into the Portugal star's face.

8 - Marcus Rashford is the first English player to score eight goals for @ManUtd in European competition in a single season (excluding qualifiers) since Bobby Charlton in 1964-65. Footsteps. #UEL pic.twitter.com/pskfaBm3OI

What does it mean? Advantage United after timid encounter

It was not a thrill-a-minute contest but it puts United in a good position to progress to the semi-finals for the second season in a row, and there was little offered by Granada to worry them unduly.

However, Solskjaer will want a more committed and creative performance when they travel to Tottenham this weekend if they are to preserve their long unbeaten away run.

United must preserve Rashford for run-in

Rashford's goal made him the first United player to hit double figures in consecutive campaigns since Wayne Rooney 11 years ago.

He came off with a little under half an hour remaining, and Solskjaer will need to manage his ankle concern carefully: their league position, and their chances of winning this competition, could depend on it.

The matchwinner against Brighton last Sunday, Mason Greenwood offered little attacking threat in Spain and struggled to hold up the ball or link the play.

One such poor use of the ball gave Granada a rare chance to break at speed in the United half, although they could not make use of the opportunity.

- Manchester have won consecutive away games in Europe against Spanish opposition for the first time, also beating Real Sociedad 4-0 on the road in February 2021.
- United have registered four clean sheets in their past five games in Europe (one goal conceded), after managing just one shutout in their previous seven (12 goals conceded).
- Marcus Rashford became the fourth Premier League player to reach 20 goals in all competitions this season after Harry Kane (29), Mohamed Salah (27) and Bruno Fernandes (24).
- Rashford is the first English player to score eight goals for the Red Devils in European competition in a single season (excluding qualifiers) since Bobby Charlton in 1964-65.
- Fernandes has scored 19 of his 20 penalties taken for United in all competitions.

Before next Thursday's second leg, each side return to domestic action on Sunday. United face Tottenham away in the Premier League, with Granada travelling to Real Valladolid in LaLiga.