Hansi Flick Close To Germany Job: When The Time Comes, Things Can Be Announced Quickly

Joachim Low's reign with Germany is drawing towards a close, with Hansi Flick seemingly set to replace him after Euro 2020 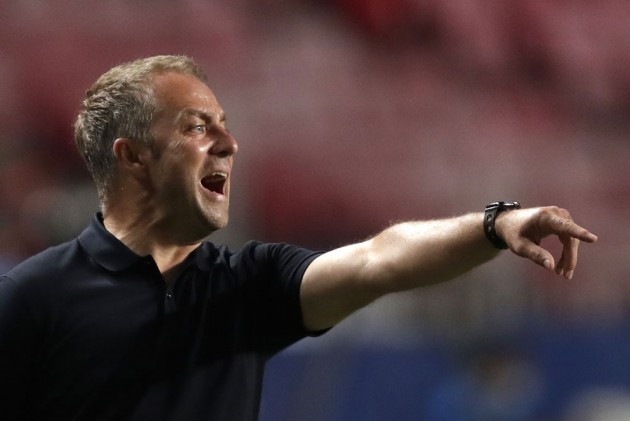 Hansi Flick has confirmed he is in advanced talks with the German Football Association (DFB) about taking over as coach of the national team, though his immediate focus is on saying farewell to Bayern Munich. (More Football News)

Joachim Low will end his tenure in charge of Die Mannschaft after the Euro 2020 finals, opting to leave rather than see his contract through to the 2022 World Cup.

Flick is seemingly set to return to the Germany fold, having previously served as Low’s assistant between 2006 and 2014, a span that included being crowned world champions in Brazil.

"It is clear that I spoke to the DFB. Things always have to be regulated. It's about little things," Flick told the media on Friday ahead of his final game in charge of Bayern.

"When the time comes, things can be announced quickly."

A short but hugely successful spell at Bayern will conclude when the Bundesliga champions host Augsburg on Saturday.

Promoted from assistant coach midway through the 2019-20 season following the departure of Niko Kovac, Flick led the club to a famous treble last term, securing Champions League in Lisbon to follow on from domestic success in the league and DFB-Pokal.

#Flick: "The Champions League phase in Lisbon and beating PSG in the final was the most exciting part of my tenure. The emotions after the game, the whole team, the way the substitutes cheered them on - it was outstanding. That will remain an absolute career highlight for me." pic.twitter.com/9TJokNl8gH

"I just enjoyed the journey that I started almost two years ago," Flick said of his spell in charge.

"At that time, I knew that I wanted to be a coach again. The fact that I got the chance with Niko Kovac was great. I am happy about the journey and how it is now coming to an end.

"We were able to accompany such a great team on an intensive and successful path. But I am also looking forward to what is to come. Life is like a river, it goes on and on.

"To train such a team is something very special. I really liked the greed to win and to score. It was a great time that is now coming to an end."

Flick pinpointed the Champions League final win over Paris Saint-Germain as the highlight of his reign, while made clear he will continue to follow Bayern's progress as a lifelong supporter.

"I don't want to evaluate the development of the club," he added. "Everything is in a state of flux and that's a good thing. Positions are filled again and again, players come and go. That's normal.

"I also spoke to every single player again. That was great and I will continue to follow your path. We were so close, that can't be brushed away. For that I am very grateful."