The India player had scored 183 for Rest of India during last year's Irani Cup match against Vidarbha, who recently retained the Ranji Trophy with another exemplary showing. 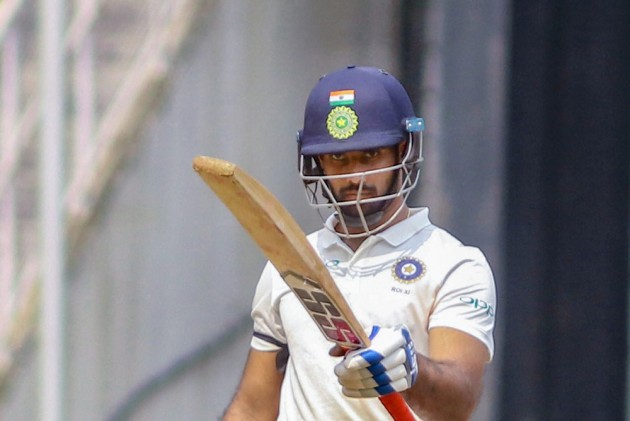 Hanuma Vihari Friday scripted history by becoming the first player to score a hat-trick of hundreds in the Irani Cup, helping Rest of India rally and set Vidarbha a tricky 280-run target at Nagpur.

Enjoying a good run of form, the 25-year-old Vihari created the record with a single down the ground on the fourth day, his second century of the match and third straight in Irani Cup.

The India player had scored 183 for Rest of India during last year's Irani Cup match against Vidarbha, who recently retained the Ranji Trophy with another exemplary showing.

Besides Vihari's 180, India's Test vice-captain Ajinkya Rahane made 87 and Shreyas Iyer raced to a 52-ball 61, helping Rest of India to declare their second innings at 374 for three, a day after conceding a big first-innings lead.

Needing 280 for an outright win, Ranji champions Vidarbha were 37 for one at the close of play, still 243 runs shy of the target with nine wickets in hand.

While Akshay Karnewar's gutsy century on the third day powered Vidarbha to a 95-run first-innings lead, Rest of India rode on a third-wicket partnership of 229 runs between Vihari and Rahane to grab the initiative on the penultimate day.

Starting from an overnight score of 102 for two, Vihari and Rahane added 110 in the morning, and then put together a further 63 before Rahane was dismissed. By that time, Vidarbha had fallen behind.

Thereafter, Iyer took the attack to Vidarbha as Rest of India looked for quick runs before the declaration. Iyer smashed a six and a four off left-arm spinner Aditya Sarwate, and then did the same to paceman Rajneesh Gurbani in the next over.

When left-arm spinner Karnewar came into the attack, Iyer whacked him for another 10 runs to reach his half-century in just 45 balls. Vihari too used the long handle to good effect after reaching his 150.

Vihari struck 19 fours and four sixes during his 300-ball knock, while Iyer smashed five boundaries and four sixes. During his stay in the middle, senior pro Rahane found the fence six times and cleared it once.