After an eventful 2021 that included Tokyo Olympics, India's top sportspersons face a challenging 2022. Their dreams and aspirations remain as high as ever. 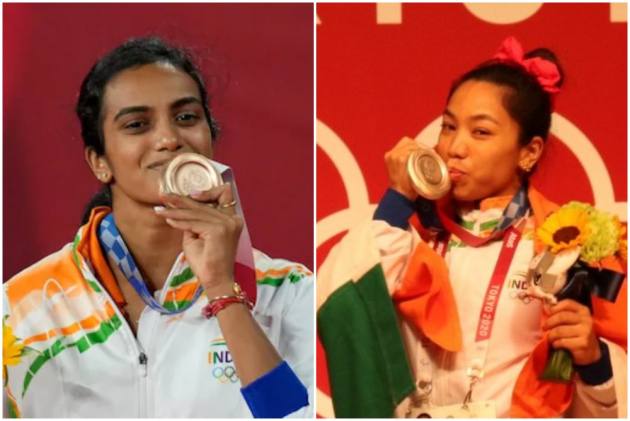 The year 2021, though marred by the COVID-19 pandemic, was a successful year in terms of Indian sports. An impressive performance at the Tokyo Olympics saw the nation bagging an unprecedented seven medals, including a first-ever track and field gold. (More Sports News)

Given that Tokyo 2020 event was organised at such a tough time, the achievements of the players looked much greater. With not a lot to remember from the year, here is a look at how the Indian winners at the Tokyo Summer look ahead to the new year 2022.

Saikhom Mirabai Chanu, the silver medalist at the Tokyo Olympics, said that the year 2021 was a remarkable one and a major boost to do even better in 2022. Mirabai has been out of action after Tokyo and she has a lot of work to do in the Asian Games and Commonwealth Games.

Another Indian woman who shone at the Tokyo Olympics was PV Sindhu. Though she could have won more than a bronze considering her arch-rival and 2016 Olympic gold medalist Carolina Marin had pulled out of the event due to injury, PV Sindhu’s achievement made her only the second Indian and first female to win two Olympic medals.

With major tournaments like the All England and World Tour Finals scheduled to take place in 2022, PV Sindhu is eyeing to earn some more accolades. However, the packed badminton calendar will see Sindhu “pick and choose” tournaments she wants to play. The season begins with the India Open.

Dear 2022,
I know we just met, but I have a feeling you and I are going to do great things!ðÂÂÂÂÂÂ¥°ðÂÂÂÂÂÂ¥°

Meanwhile, India’s silent hero at the Tokyo Olympics, Ravi Kumar Dahiya said that he will keep working the way he has done so far. To the unversed, Ravi had marched into the final of the Tokyo Olympics last year where he had lost to two-time world champion Zavur Uguev of ROC.

Ravi has already said that he is looking to bag a medal each from the 2022 Commonwealth Games and the Asian Games in China.

Living up to the expectations, India’s Bajrang Punia had defeated Kazakhstan’s Daulet Niyazbekov to bag the bronze medal at the Tokyo Olympics. Apart from the Commonwealth Games and the Asian Games this year, the star Indian wrestler will also be competing at the UWW Rankings events. He has already started his 26-day training camp in Moscow for the busy season ahead.

Manpreet Singh, who guided the Indian men’s hockey team to the bronze medal glory in Tokyo, also sent good wishes to everyone in the New Year with a family picture.

Happy New Year from us to yours - may #2022 be full of grand adventures, opportunities, remarkable and blissful year ahead! #bringiton pic.twitter.com/o1vnffffMv

Neeraj Chopra, the star of the Indian contingent at the Tokyo Olympics, is currently in the USA for a three-month camp. All eyes will be on the Tokyo Olympics gold medalist when he steps out to compete in Commonwealth Games, Asian Games and World Championships, and the Diamond League.

Meanwhile, Bhavani Devi, who is the first Indian fencer to play at the Olympics, will be playing four World Cups in Georgia, Bulgaria, Greece and Belgium. Recalling her achievement at the Olympics, Bhavani Devi shared a reel of pictures calling it “one of the most memorable” years of her life.

2021 will definitely stand out as one of the most memorable years of my life. So many years of hard work and consistent support of many people across different parts of the world paid off this year.

I will forever cherish all these memories and experiences. pic.twitter.com/8bO0C2ehNW

2021 is over and it has been a tough year. For me, it has been the most difficult year of my life. I started it off in the best possible manner, worked hard, trained harder, but didn't get the result I was hoping for. 1/3 pic.twitter.com/qoO7YCBmY8

Refuelling and re-energising for the new year ahead. Hope everyone has a good end to the year, and a safe, happy and healthy year ahead! #YearEnd #HappyNewYear pic.twitter.com/GJxaqY5dyl

India's top sportspersons have begun 2022 with a lot of resolve. They will only hope that COVID stays away and the events are held as scheduled.