'I am missing my child. When I left, the child was 15-days-old and now the child will be of four months', Hardik had said at ODI press. 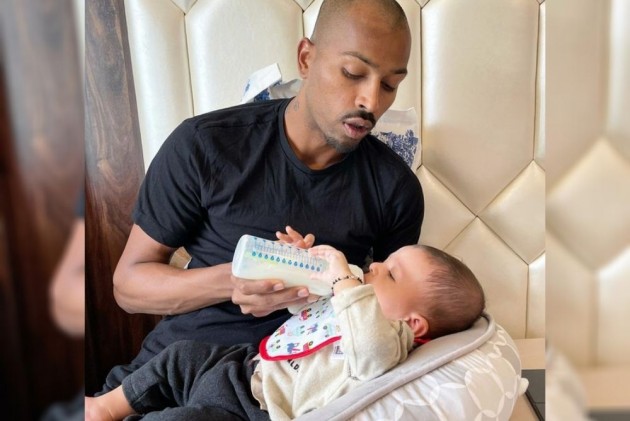 India's all-rounder cricket sensation, Hardik Pandya after successfully playing a limited series against Australia has returned to India to spend some quality time with his wife Natasha Stankovic and baby Agastya.

The 27-year-old cricketer had shared a picture on social media on Saturday with his newborn son which has now gone viral. In the Photo, Hardik is feeding his son and he captioned the adorable picture 'From national duty to father duty'

Hardik and Natasha became parents on July 30 this year.

The cricket series in Australia went well for Hardik as he won "Man of the match" title thrice in six games. He scored 210 runs in three ODI matches and a stellar performance in the other  three T20I games

Hardik has been far away from home and family in UAE due to IPL since the past four months. While many of his teammates were accompanied by their families, Hardik went alone.

During an ODI press briefing, he said "I am missing my child. When I left, the child was 15 days and now the child will be of four months. Waiting for when I will return. Yes, a lot of things have changed but for the better and this is the best time in my life."

Meanwhile, a fews days back, another picture was widely shared in which both Virat Kohli and Hardik Pandya were visiting a baby store in Sydney.