Harleen Deol's Super Catch Will Give Men The Blushes, Watch Her Effort In IND vs ENG T20 Tie 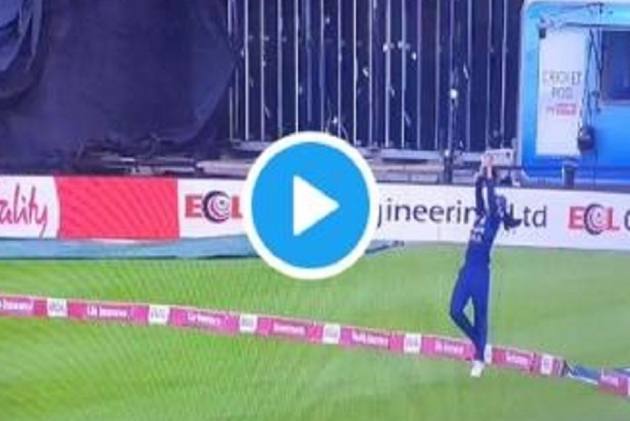 Although India lost the fisrt T20I against England via D/L method, Harleen Deol’s dismissal of England women batter Amy Jones will go down in history as one of the best boundary catches. (More Cricket News)

England batting first were in a strong position and were trying to gather quick runs at the closing stages of their innings.  Harleen was positioned at long-off trying save the boundaries.

In the 19th over Jones stepped out trying to launch the ball over the infield off  Shikha Pandey’s over.

Out of 10, how much would you rate this epic catch by Harleen Deol? âÂÂÂÂÂÂÂ¤ï¸ÂÂÂÂÂÂÂðÂÂÂÂÂÂÂÂÂÂÂÂÂÂ®ðÂÂÂÂÂÂÂÂÂÂÂÂÂÂ³#ENGvIND #HarleenDeol pic.twitter.com/E07ptipieP

Jones timed the ball too well and it seems destined to go over the ropes for a six. But Harleen had other plans.  Harleen jumped in air to grab the ball but as the momentum was taking her over the ropes, she tossed the ball in the air. Deol went over the ropes but dived back in to complete a sensational catch which was even applauded by the opposition dugout.

India though eventually lost the match by 18 runs via D/L method.