Harry Winks scored the third-longest distance goal in the Europa League since 2009-10 for Tottenham, but said he did not mean it 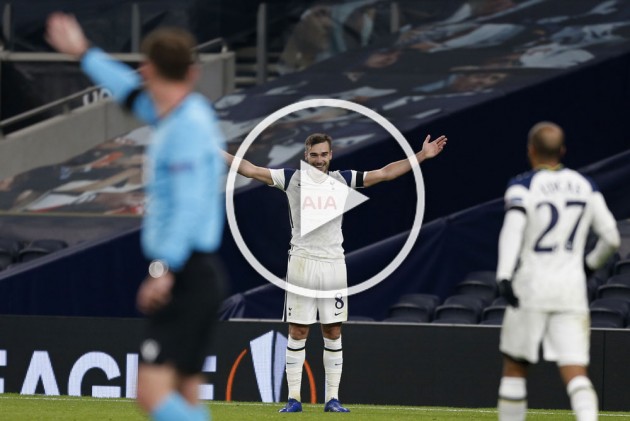 The England midfielder scored Tottenham's third in a 4-0 victory on Thursday from 53.7 yards when he received possession from a throw and saw a long ball forward sail into the top-right corner of the net.

Winks looked surprised after he celebrated with his Tottenham team-mates and only two goals have been scored from a longer distance in the Europa League since 2009-10.

Jordi Gomez's goal for Omonia against PSV (61.2 yards) and Kemar Roofe's strike for Rangers versus Standard Liege (55.4 yards), both in October of this year, were further away from goal.

But after his spectacular effort from distance caught Ludogorets goalkeeper Plamen Iliev off his line, Winks said he had not meant it.

"It was a pass for Gaz, I overhit it, but I'll take it!" @HarryWinks comes clean on his wonder goal and sums up tonight's win.#UEL #COYS pic.twitter.com/XtzPiLpmPP

He told BT Sport: "I'd love to sit here and say that I did, but I've got to be honest and say no.

ðÂÂ´ó Â§ó Â¢ó Â¥ó Â®ó Â§ó Â¿ Tottenham Hotspur midfielder Harry Winks comes clean on his wonder-goal and sums up the victory for Spurs against Ludogorets in the Europa League this evening:

"I was bit gobsmacked myself. I saw Gareth Bale run in and overhit it. I'll take it at the end of the day.

"It has been a while since I last scored but I am happy with the way the team played."

Tottenham boss Jose Mourinho joked that Winks should have been a little more coy and claimed it was deliberate.

He said: "Harry is too honest, so I am not happy with him! With a goal like that you say you wanted to do it. But he's a good kid, he is honest."

Asked again about the goal at his post-match news conference, Mourinho added: "Winks was honest and he said in some flash interview that he wanted to play a diagonal ball to Bale.

"If it was me I would have said I did and won the Puskas goal!"

Winks hopes his overall performance has done enough to catch the eye of Mourinho after he admitted it has found it hard being on the fringes of the side in the Premier League.

He added: "It is tough. It is very difficult. All I can do is when I get opportunities like this is play well.

"It was really enjoyable. We started with the right intensity because we didn't give them any chance to breathe. It was a good game for us."