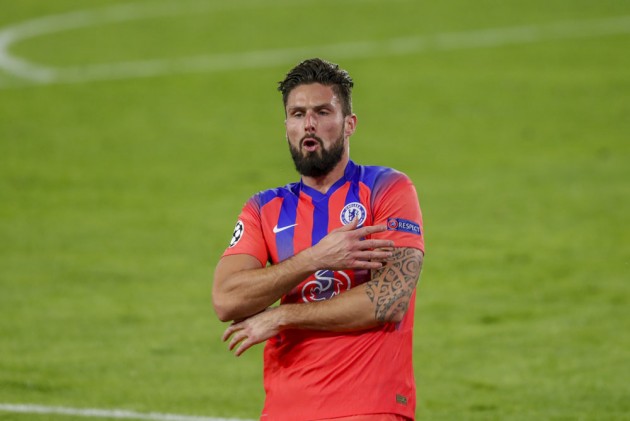 Olivier Giroud has to fight for every chance he gets, according to France coach Didier Deschamps, after the experienced forward marked a rare Chelsea start with a four-goal showing against Sevilla. (More Football News)

Having booked Chelsea's place in the last 16 of the Champions League with a late winner against Rennes last week, Giroud starred as Frank Lampard's side romped to a 4-0 win at the Ramon Sanchez Pizjuan on Wednesday.

Giroud, the first Chelsea player to score four times in a European match, has started just two games in all competitions this term and is behind Tammy Abraham and Timo Werner in the pecking order, though Lampard acknowledged the 34-year-old's display against Sevilla means he must be considered to feature from the off against Leeds United this weekend.

It is a different story for France, with Giroud a regular under Deschamps, starting in all but one of Les Bleus' World Cup games during their successful campaign in Russia two years ago.

Giroud has made 105 appearances for his country and is France's second-highest goalscorer, with his tally of 44 just seven shy of Thierry Henry's record of 51.

Speaking after France were drawn against Belgium in the Nations League finals, which will take place next October, Deschamps lauded Giroud's strength of character and lasting quality.

"He had the immense pleasure of being able to start a match. It does not happen to him often, even if by returning he scores important goals," Deschamps told a news conference.

"Scoring a quadruple in the Champions League doesn't happen every day. Besides, Olivier is someone with a big mind, a big character.

"He is forced to fight against everyone, to excess at times. It was an important game as they played for first place against Sevilla. Faced with such an opponent, it further enhances his performance. Good for him and for his club."

4 - Olivier Giroud is the first Chelsea player to score four goals in a game since Frank Lampard in March 2010 vs Aston Villa, while he's the first to net four for Chelsea in a European Cup/Champions League game. Incredible. pic.twitter.com/p3k9sdCz9k

Giroud's France team-mate Kylian Mbappe has not been having as much joy in Europe's elite club competition, however.

The 21-year-old is on 99 Paris Saint-Germain goals in all competitions but has not scored in the Champions League since netting against Galatasaray in December 2019 – a run of nine matches.

Deschamps, though, has no concerns, saying: "He was often decisive anyway in scoring or [giving] the last pass.

"He is a player who makes the difference. It's been a while since he scored in the Champions League, but it happens.

"He wants to stop this run, but that does not prevent him from doing decisive things for his club despite everything."