Hima Das has been making headlines after winning a clutch of gold medals in European competitions this month. But Hima could lose her brand value if she is unable to qualify for September's World Championships in Doha. 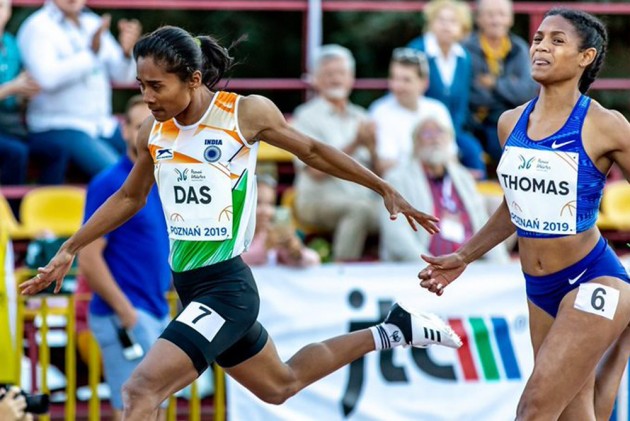 Any publicity is good publicity for any Indian sportsperson who is not a cricketer.

So when the social media goes overboard after Hima Das sprints to win five gold medals in Europe or pundits postmortem these to the millisecond, it's all "positive news" for brand managers handling relatively lesser mortals of Indian sport.

Hima Das is no Virat Kohli. She is not even a PV Sindhu or a Mary Kom. But Hima had enough potential to woo a global brand like Adidas. Full of early promise and with a style of her own, impossible seems to be nothing for this sinewy 19-year-old village girl from Assam.

ALSO READ: In A Sport Of Fine Margins, Why Glorification Of Hima Das Is Not Gold Class

The world suddenly changed after Hima became the first Indian sprinter to win an international gold medal. It came in the 400 metres of the World Under-20 championship in Tampere, Finland. She clocked an impressive 51.46 seconds but it was the way she raced past three competitors in the last 100 metres that won YouTube millions of hits. She became a hero overnight after newspapers ran it on Page 1 and leading TV channels made headlines.

Sprints have a natural attraction to one and all. We have done them at school, at colleges and even at family picnics. Hima immediately attracted companies that manage sportspersons. She was signed up by Infinity Optimal Solutions Private Limited, the company that manages boxers Vijender Singh and Mary Kom.

Adidas was Hima's first major signing in 2018. "Any brand that aligns with an athlete wants to be part of a journey," said IOS boss Neerav Tomar, explaining why the German sports shoe makers signed a two-year deal till the 2020 Olympics. Tomar says Hima is worth 4-5 crores in terms of brand value and that's quite a handsome value for a non-cricketer.

But there are risks involved in this business of sports. Doping, criminal offence or an injury can bring everything to a nought. Hima is emerging from an injury sustained in the Asian championships in Doha in April. A back spasm stopped Hima in her tracks in the 400 metres and from then on, it's been a struggle to recover and compete.

The five gold medals won in Europe this month at least brought the spotlight back on Hima but her not-so-great timings in both 200 and 400 have kept her brand managers on tenterhooks.

For any athlete to keep her brand value, visibility and performance are two pillars. "We are riding on the visibility factor now. It's a fact that we have hiked her price three times to what she was commanding recently," said Tomar, who added that IOS were significantly close to signing Hima up with a tyre, a watch and a cooking oil company.

Nothing close to what a Virat Kohli would charge, Hima's current value is approximately 55-60 lakh a brand for a year. Apart from Adidas, her major endorsements include State Bank of India, Star Cement (in North-East) and Edelweiss Financial Services.

Tomar said the publicity that Hima got after her recent gold medals highlighted the "ignorance towards sports other than cricket." Several top political leaders, superstar cricketers and Bollywood icons profusely praised Hima for her golden run.

"When a country remains glued to only cricket, any news of a gold medal seems massive. Lack of understanding (the value of timings) comes through clearly. That's a reflection of how sports minded we are as a nation.

"But at least people are saying good things about an athlete. If scoring 400 in school cricket makes headlines in national dailies then why can't Hima get publicity? After all, it's an international event," argues Tomar.

But then brand value does not work on newspaper headlines. It depends on an athlete's consistency and the potential to win a medal in an Olympics or a world championship. Hima is pregnant with possibilities though her recent timings are way below the qualifying standards for the Doha event in September-October.

"It's surely a concern. As managers, we live on hype and expectation. It is imperative that Hima remains among the top 5-7 runners in her respective categories. Otherwise, she will lose out. The world championships in Doha will be a serious test going forward," said Tomar.

The sky can be the limit if Hima can indeed raise the bar and shave off those crucial seconds to qualify for Doha and Tokyo. Apart from a fixed fee, Hima stands to win bonuses too. A gold can fetch 50 lakhs, a silver 30 and bronze 15 lakh. Not just individual races, mixed relay -- India have great potential -- can fetch extra money.

So, it's going to be a lot of hard work for Hima Das. She is currently training in Poland while her managers cash in on the "any publicity is good publicity" wave.