His Bat Shuts Up Critics, Aaron Finch On The Verge Of Achieving Greatness

Aaron Finch scored 100 runs as Australia beat England by 64 runs at Lord’s. He is proving to be a great successor to Steve Smith with his batting skills in this World Cup. 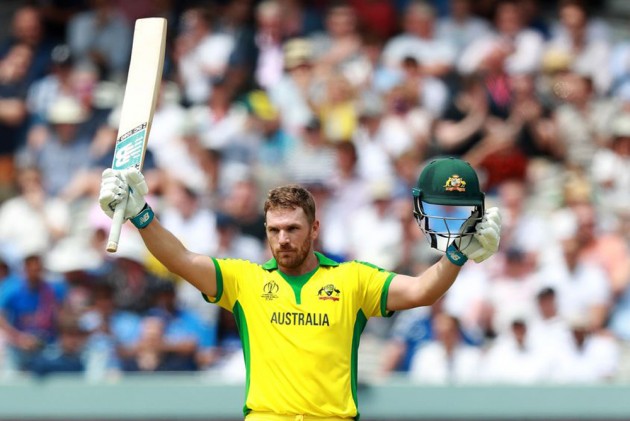 Some are born great, some achieve greatness, and some have greatness thrust upon them. Such is the eternal universality of Shakespeare’s insights, that Malvolio’s musings in Twelfth Night could easily apply to the Australian captaincy instead. If that was the case, then Aaron Finch would certainly fall into the third of those categories.

Incidentally, Malvolio’s preceding line is “be not afraid of greatness” and that neatly epitomises Finch’s attitude after having the role thrust upon him last November following Steve Smith’s year-long ban and the struggles of his immediate successor Tim Paine.

The 32-year-old went from simply focusing on making runs and solidifying his own place in the side to being responsible for the fortunes of the entire team, in addition to incurring all the extra off-field duties that come with being skipper.

Coincidentally or otherwise, his batting initially suffered – an average of 11.86 during his first seven ODIs in the role led to uncomfortable questions about his selection – but since then he’s been totemic atop the order.

Amassing 1,104 runs in 16 ODIs, with four centuries and an average of 73.60, Finch is hitting white-hot form at just the right time.

And he only seems to be getting hotter as this ICC Men’s Cricket World Cup progresses, plundering 496 runs so far – a total only surpassed by his opening partner David Warner – with a pair of centuries.

The latest of those was a beautifully-crafted 100 from 116 balls, full of his trademark leg-side and straight hitting, against his country’s oldest rivals England, at Lord’s.

He has directed Australia to six wins from seven games at the tournament and the 64-run victory in London saw them become the first team to book their spot in the semi-finals – with two matches to spare. Not bad for someone who had the captaincy thrust upon them.

And what about his leadership style?

“When I first started in leadership roles I was quite young – in all the junior representative teams and things like that,” explained Finch in his press conference prior to the England match.

“From doing it about eight years ago, with the Melbourne Renegades, to now, I've changed a lot.

“Just in the way that I used to talk a lot and some feedback from the boys was: ‘Don't talk so much.’ I took that on board.

“I don't tend to talk as much in team meetings – I try and let everyone else have their say and just contribute where I need to.”

Finch’s reasoning is sound: after all, when his on-field performances are speaking such volumes – what more is there to say?

Australia’s success at this World Cup is largely down to the displays of the incredibly talented individuals they possess but there’s also a togetherness in the squad seeing them through.

And that is in no small part thanks to the atmosphere in the dressing room, for which Finch sets the tone.

“It's a bit more than wins and losses in a leadership role,” he added. “It's about making sure that you're creating a great environment for everyone to succeed in.

“It can be a daunting place when you come from domestic cricket to the international scene, especially if it's an international tour.

“So to have guys come in and be really comfortable around the team straight away is a big positive for myself, the coaching staff and all the other senior players that contribute to that.”

There may indeed be more to the leadership role than just wins and losses but the consistent victories certainly don’t hurt.

If the Australians continue in this vein they could well be lifting the World Cup for a record-extending sixth time on 14 July – an accomplishment Finch would add to a captaincy CV that already includes the Big Bash League title he led the Melbourne Renegades to earlier this year.

With his batting alone, the Victoria native would be a key cog as he looks to extend a streak of nine 50s in his last 12 ODIs but as skipper, his role becomes even more pivotal.

Luckily, Finch may have had the Australian captaincy thrust upon him but he’s well on his way to achieving greatness.