Even as Australia continued to fight bushfires, cricketers playing in the Sheffield Shield at the iconic Sydney Cricket Ground (SCG) on Tuesday said the air was "toxic," worse than in India 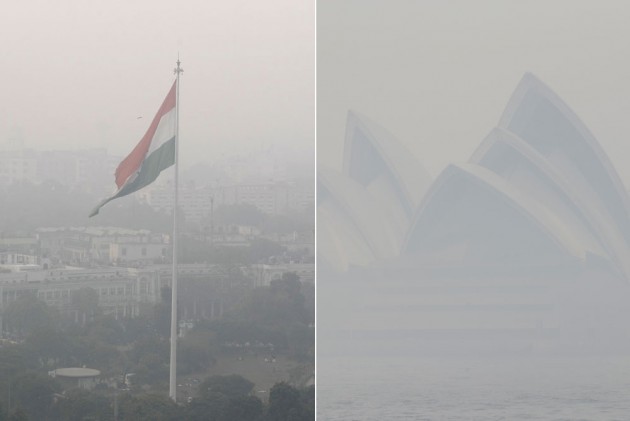 As almost 3,000 firefighters deployed across New South Wales in Australia continued to fight bushfires on Tuesday, cricketers playing in the Sheffield Shield at the iconic Sydney Cricket Ground (SCG) said the air was "toxic," claiming it was worse than in India. (More Cricket News)

Spinner Steve O'Keefe, who took four wickets to help New South Wales beat Queensland, said that the air quality during the match was far worse than in India and kids should be "locked up inside" to save from it.

"The one thing they need to look at is the air-quality policy. That was shocking. I don't have kids, but if I did they'd be locked up inside, and if I was at home I wouldn't be training or playing in it. I tip my hat to Queensland because when you're behind in the game you've got a reason to whinge, but they got on with it," ESPN Cricinfo quoted O'Keefe as saying.

On Tuesday, NSW health authorities advised people to stay indoors as the smoke emanating from the bushfires engulfed the area surrounding the eastern coast of Australia.

"In the future, they need to look at it because it's not healthy - it's toxic. That was far worse than India. It got to the stage we weren't going to come off for quality, it was more about visibility. It was getting hard to pick the ball up. I'm sure they'll address it. It's a bit left-field to have something as severe as this.," he added.

The harbour's ferry service was also suspended due to low visibility. During the match, the smoke was so thick that visibility also looked to be an issue for players on both sides.

Queensland skipper Usman Khawaja also said that it was difficult to breathe during the match as there was a lot of smoke to deal with.

"When we arrived here this morning it reminded me of playing in India. It was just hard to breathe, there was a lot of smoke. I was only out there for about five overs but it just got stuck in your throat. I was actually surprised the bowlers were bowling for that long, I thought they would have taken out of it. It was bad but it wasn't unplayable," Khawaja said.

Similar scenes were witnessed during India vs Bangladesh T20I at Delhi on November 3 this year. Dipping air-quality in the national capital was a huge concern and many former players asked the BCCI president Sourav Ganguly to shift the match out of Delhi.

However, the match went ahead as planned and it was Bangladesh that came out triumphant.