How Can Martin Odegaard Improve Arsenal? Or, Why Gunners Wanted Real Madrid Midfielder

Arsenal have brought in Martin Odegaard from Real Madrid on loan. If he can get fit, he could provide a much-needed creativity boost 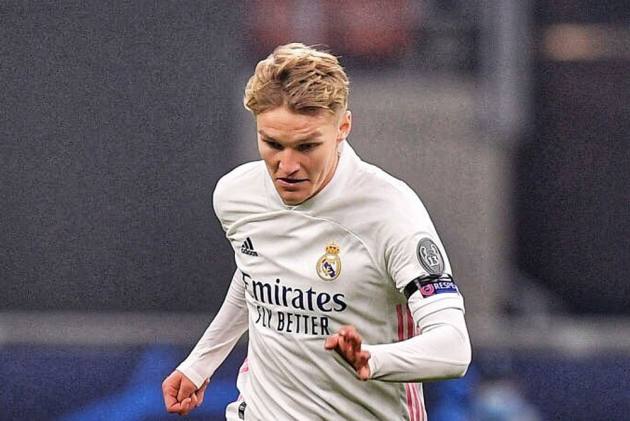 Martin Odegaard's Real Madrid career was being set up to fail right from the start, when he joined the club just over a month after his 16th birthday back in January 2015. (More Football News)

The fact he remains their player six years on is testament to the Norwegian's talent, persistence and level-headed attitude, as his first couple of years at the club seemingly had people willing him to fade into obscurity.

From unnecessary speculation relating to his wages and exaggerated suggestions that his presence threatened the future of Madrid's academy, to murmurings that his arrival upset the harmony of Real Madrid Castilla's squad – life wasn't made easy for him early on.

For the most part he has managed to keep his career on track and has shown why he was so highly rated as a 15-year-old bursting on to the scene at Stromsgodset, impressing in a series of loan spells, but Odegaard now has another challenge in front of him.

He joins Arsenal on loan for the rest of the season in a move that will surely shape the next major step he takes in his career, whether that is kicking on at Real Madrid or moving elsewhere permanently.

While first-team football has been difficult to come by at Madrid this term, it's easy to see why Arsenal made their move for the attacking midfielder.

If there are any Arsenal fans questioning why they have moved for a player who has made just three starts for a – let's be frank – unspectacular Madrid side this season, it's worth recalling the amount of talent Zinedine Zidane has struggled to incorporate and subsequently discarded in recent years.

Marcos Llorente, Achraf Hakimi, Sergio Reguilon, Theo Hernandez, James Rodriguez – you could potentially even add Isco to that list in the not-too-distant future. All are fine players generally thriving elsewhere, but Zidane was seemingly unconvinced by them.

Injuries haven't helped Odegaard's cause this term, but his form with Real Sociedad on loan last season demonstrated just how impressive he is when given consistent opportunities – and it was revealed in July that he had been suffering with a chronic knee issue for most of 2019-20.

The 22-year-old created 62 chances in LaLiga last term, a tally only beaten by five other players, one of which was predictably Lionel Messi. 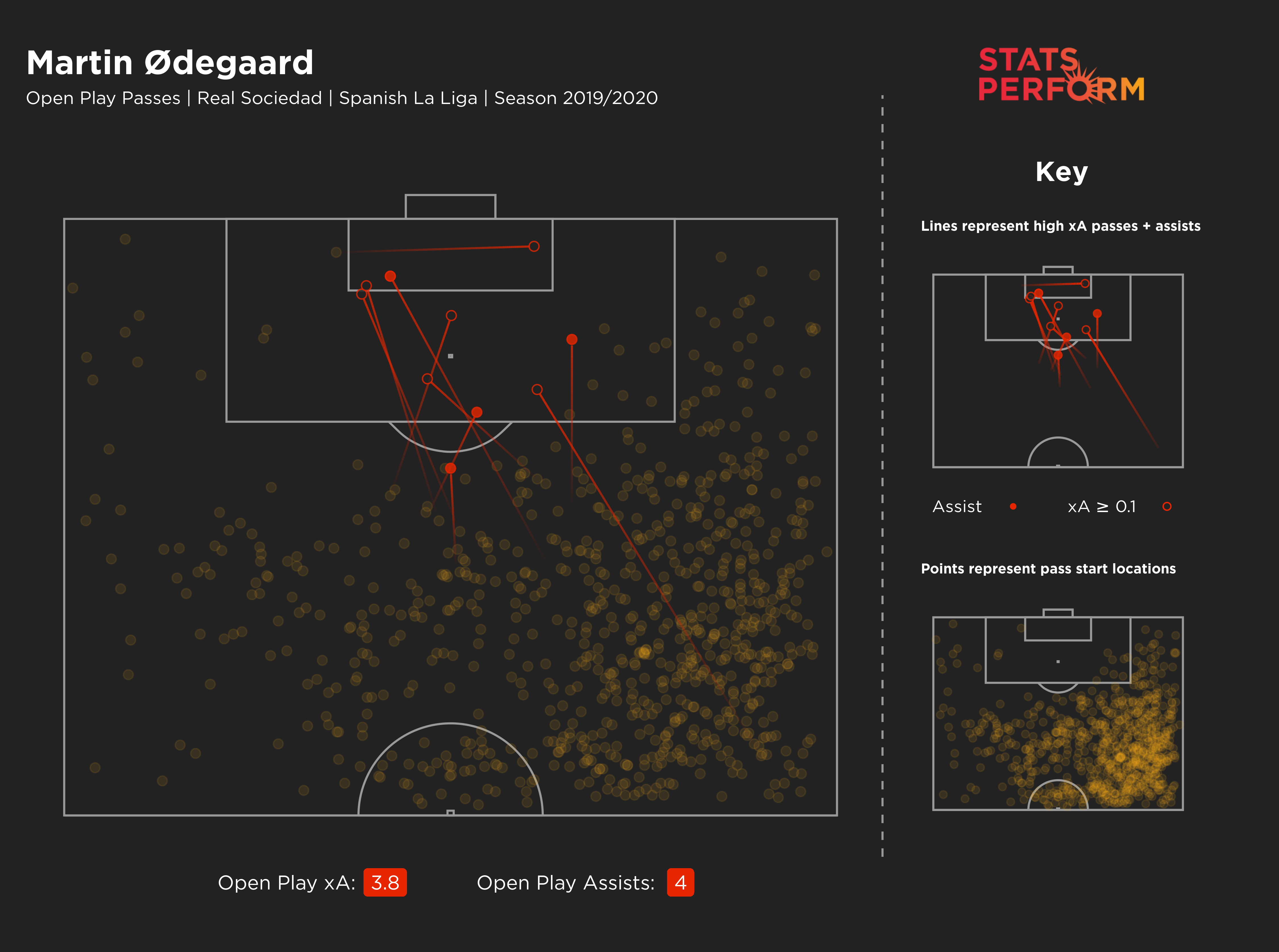 That gave him a key pass frequency just under 0.5 every 90 minutes, which again ranked very highly among players with more than 30 chances created – six had better records, though his 6.8 xA (expected assists) rating was third only to Messi and Jesus Navas.

He also offers a great threat from set-pieces, with 27 of his key passes coming from dead-ball situations. This is an area Arsenal have struggled, as their 20 chances created from set plays is the fourth-fewest in the Premier League this term.

Odegaard was a major catalyst for La Real's largely impressive campaign, as they reached the Copa del Rey final – which is still due to be contested later this year – and finished sixth in LaLiga.

Arsenal fans will hope he can have a similar impact in the second half of the 2020-21 season, particularly given their lack of creativity at times this term.

WHERE WILL HE STRENGTHEN ARSENAL?

At La Real, Odegaard was often deployed from the right side of the attack in a 4-3-3, but given he is most comfortable on his left foot, he would routinely cut inside and wreak havoc in the middle. 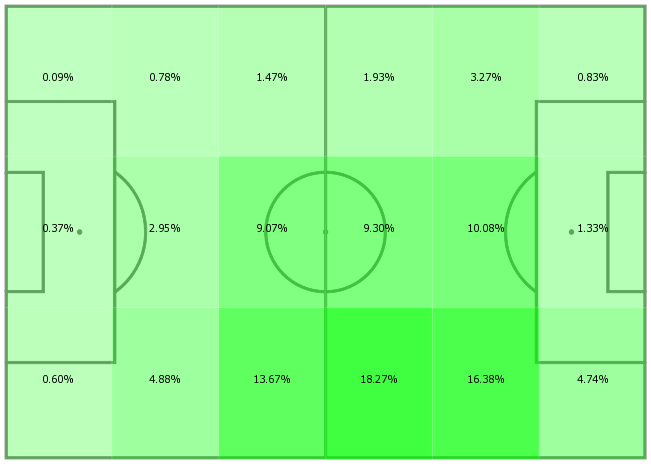 While he spent more time on the right flank, with 38.3 per cent of his touches occurring in the right third of the pitch between the halfway line and the edge of the opposing area, much of his best work was carried out more centrally.

Indeed, 31.1 per cent of his key passes and assists came from the middle third of the pitch just outside the box. 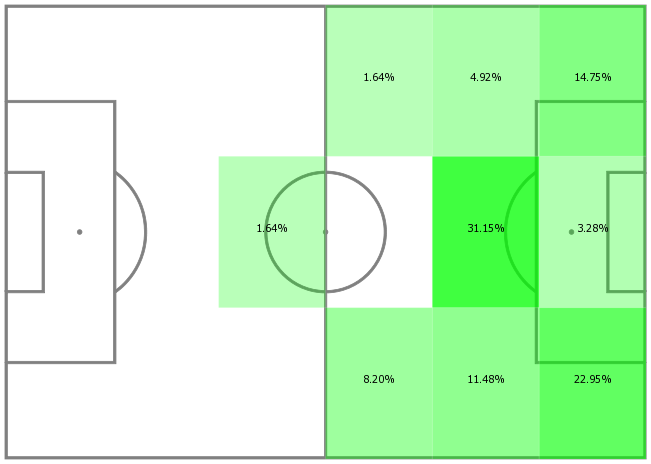 Arsenal have been much less active centrally and on the right flank, with just under 12 per cent of their assists and chances created stemming from play in the middle of the attacking half. They aren't much more effective on the right, which will likely not come as a surprise to Gunners fans given the largely underwhelming form of Willian and Nicolas Pepe. 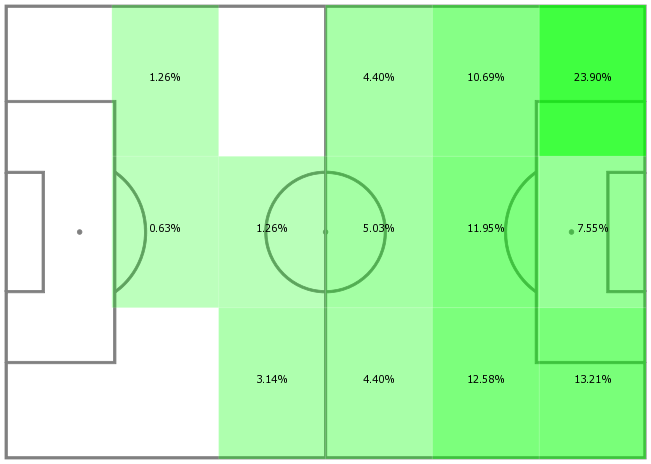 Odegaard's display in the September 2019 defeat at Sevilla was something of a microcosm of much of what he was good at last season, with his late assist for Portu seeing him come in off the right and play a disguised pass into the right side of the box for his team-mate to finish. Earlier on, he had taken up possession in a central area and sliced open the Sevilla backline only for Willian Jose to skew wide.

In both situations he showed great poise, a trait he has combined with his wonderful ability on the ball, as demonstrated by the fact he played 19 key passes after ball carries – Messi (30) had the most and was one of only five players to better the Norwegian in this area. 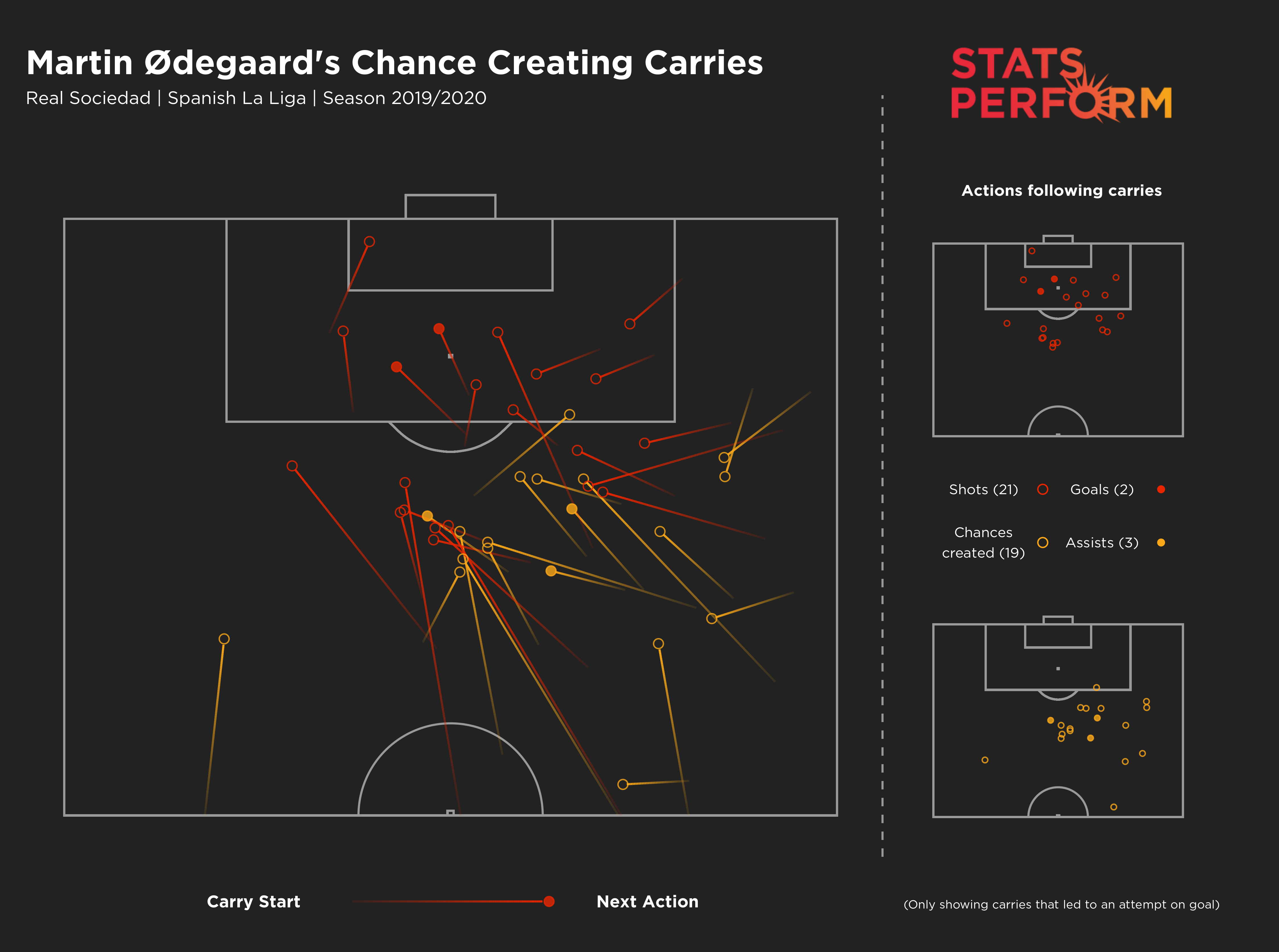 THE RISK OF SHORT-TERM LOANS

The addition of Odegaard will add some welcome creativity to Mikel Arteta's squad, the Gunners having managed 23 goals from 230 attempts (excluding penalties) - slightly below their 25.2 xG - so far in what has been a topsy-turvy 2020-21 season.

Arsenal players have collectively created 26 Opta-defined "big chances", well adrift of the league-high 43 recorded by Manchester City in 2020-21. While this only includes shots that have been specifically assisted by a pass, it does highlight a creative deficiency. 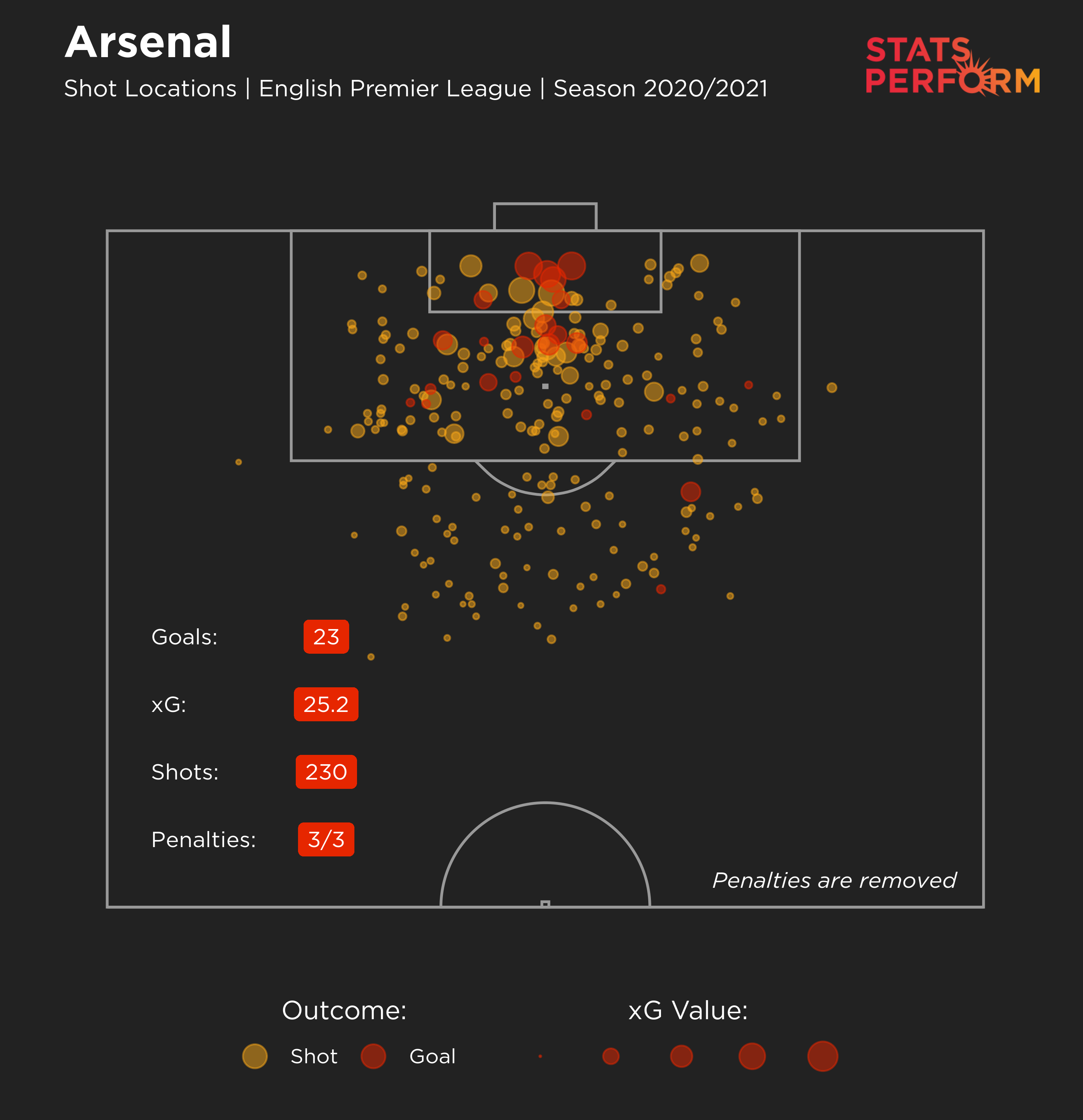 Emile Smith Rowe has impressed of late, contributing three assists in open play, but no individual has created more chances for them in the Premier League than Bukayo Saka, his total of 23 putting him one above Kieran Tierney. It is clear they need greater threat in central areas, and Odegaard should offer that.

But, while he is undoubtedly a fine talent, Arsenal fans should be wary and patient – Odegaard hasn't featured regularly this season so cannot be expected to be sharp, and this move is another instance of upheaval in a fairly short period of time after leaving La Real for a return to Madrid. It would unfair to assume he will find his stride immediately.

Short-term loans in the second half of a season are often risky and Odegaard will likely take a little while to get up to speed. If he adapts quickly, his arrival could be a masterstroke – but if he doesn't it could be a wasted few months for both parties.

Arsenal will hope he's not another Denis Suarez.