How Does Liverpool And Barcelona Target Diego Carlos Compare To Europe's Best?

Sevilla's Diego Carlos is attracting significant interest according to speculation, so we compared him to Europe's best with Opta data 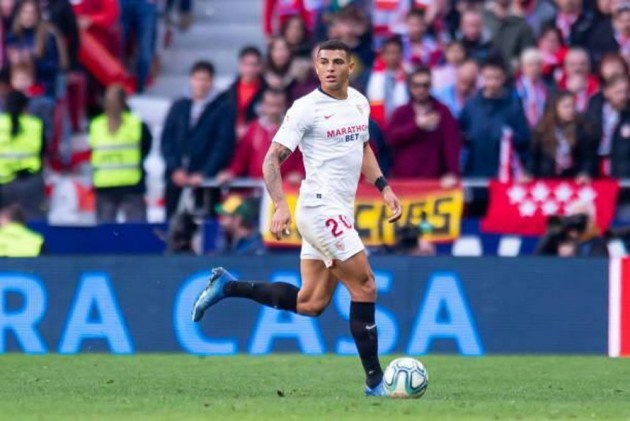 While the football world may be at a standstill due to the coronavirus pandemic, that's not stopping transfer rumours from swirling in their usual manner, with Sevilla's Diego Carlos a name persistently mentioned of late.

A Brazilian centre-back recruited from Nantes last year in a reported €15million deal, the 27-year-old is enjoying a fine debut campaign in LaLiga, quickly establishing himself as a fan favourite and key member of Julen Lopetegui's team, who are third in LaLiga.

An impressive physical specimen, athletic and comfortable with the ball at his feet, Diego Carlos has been most intensely linked with Liverpool – Jurgen Klopp is said to be a big fan and has apparently identified him as a potential partner for Virgil van Dijk.

But Barcelona and Real Madrid have also been mentioned as admirers, having been able to have a close-up look at him in LaLiga.

The Sevilla team Diego Carlos plays in is quite direct, as such it's no surprise to see he plays a large portion (229) of his passes long – of our select group, only Van Dijk (281), Leonardo Bonucci (249) and Mats Hummels (235) have attempted more.

That undoubtedly impacts his overall pass accuracy of 83 per cent, the worst of the 17 players examined. However, Sergio Ramos has attempted only 10 fewer long-range passes, yet his overall completion rate is significantly better at 91 per cent.

His accuracy is even more unimpressive in the opposition's half, as it comes down to 64 per cent, compared to Ramos and Clement Lenglet at 87 per cent. Nevertheless, Sevilla's vertical style of play is significantly different to the setups of Real Madrid and, in particular, Barcelona, while the data does not take into account how difficult each pass was.

Regular Sevilla watchers will tell you Diego Carlos has a penchant for an eye-catching cross-field pass, but the data doesn't lie – many don't reach their target.

Only 48 per cent of his long-range passes find a team-mate, which again is the worst of the players analysed. It poses the question as to whether such a direct system is suited to Diego Carlos' attributes.

He is less prone to giving the ball away when distributing short – as you would expect most players to be – as he finds a Sevilla player with 90 per cent of those passes, but only Harry Maguire (89 per cent) has a lower record in this scenario, the highest being Presnel Kimpembe (96 per cent).

Start your weekend off in right way, by taking a look at the main man in action during training!

MUSCLE FOR A TUSSLE

Don't let his clean-cut, well-coiffed exterior fool you - one thing Diego Carlos certainly cannot be accused of is shying away from collision. He has been involved in 196 duels this season, with only Maguire (287), Van Dijk (247), Ramos (213) and Mats Hummels (205) from our select group recording more.

The Brazilian's success rate of 56 per cent in those duels is middling, though. Van Dijk leads the way here, coming out on top 75 per cent of the time in such situations.

But Diego Carlos does come off fairly well with respect to tackling, having attempted 30 and been successful 19 times. That gives him a success rate of 63 per cent, better than 10 others in this select group, including Van Dijk (55 per cent) and Ramos (62 per cent).

Diego Carlos isn't dribbled past very often either, with only eight occurrences of that this term. Six of the chosen group have better records, though three of them are on seven and only one – Leonardo Bonucci (two) – has been beaten fewer than six times.

The clearances metric is where Diego Carlos performs best. He has found himself in the right position to clear danger 128 times in 2019-20, the third best among defenders in LaLiga.

Only Van Dijk (135) and Maguire (132) have a better record in this area from our group, though it's worth bearing in mind the likes of Barcelona, Bayern Munich, Paris Saint-Germain and others do not find themselves in defensive situations as often as Sevilla.

He also leads the way in terms of headed clearances in LaLiga with 71, just shy of Maguire's 80, while Diego Carlos' 25 interceptions is a solid effort as well, though it is some way behind the Manchester United captain's 53.

While it's fair to say Diego Carlos still has areas of his game that can be improved, it's worth stressing that some data points reflect – or are influenced heavily by – the team's setup.

Although the accuracy of Diego Carlos' long passes – a feature of Sevilla's direct system – leaves a mark against his name here, as an out-and-out defender, he is not disgraced when compared to a group of centre-backs most would consider the elite, an applaudable feat given this is only his fourth season in one of Europe's top-five leagues.