Gokulam Kerala overcame a sturdy-looking NEROCA FC side in their 2019-20 I-League encounter at the EMS Corporation Stadium. Here are the highlights of Gokulam Kerala (GKFC) Vs NEROCA FC (NFC) here 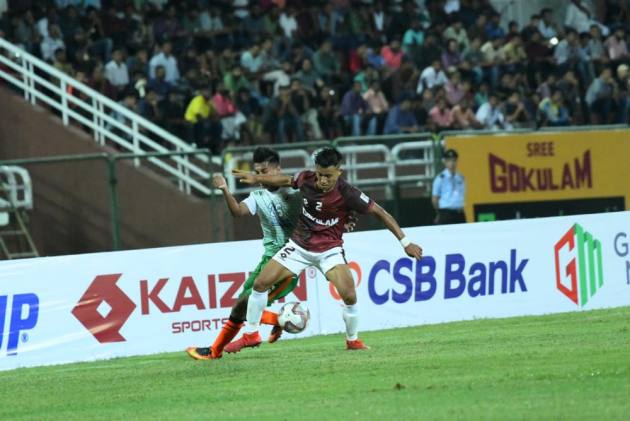 Continuing with their fine preseason form, Gokulam Kerala edged past NEROCA FC in the second match of the 2019 I-League season. The match took place at the EMS Corporation Stadium. Henry Kisekka (43') and Marcus Joseph (49') scored for the hosts. Meanwhile, Taryk Sampson pulled one back for the visitors in the 88th-minute. Catch highlights of Gokulam Kerala (GKFC) Vs NEROCA FC (NFC) here.

21:00 hrs IST: Taryk Sampson (88') scores a goal for NEROCA but can they pull another to level scores?

20:17 hrs IST: Gokulam Kerala increase their lead and this time it is Marcus Joseph (49').

19:55 hrs IST: HT' Its halftime, as Gokulam Kerala walk back to their dressing room with a slender lead Vs NEROCA FC.

19:45 hrs IST: A new-look Chennai City FC will begin their I-League title defence when they take on debutants TRAU FC tomorrow too, at Coimbatore.

Chennai City have lost some of their key players, owing to transfers in the form of Nestor Benitez, Edwin Sydney Vanspaul and Tarif Akhand who formed the core of the attack and defence last season.

It will not be an easy opening game for the Coimbatore based side as they look to put a new combination in place.

Trinidadian hitman Willis Plaza would look to replicate his last season's goal-scoring exploits when his side Churchillopen their I-League campaign against former champions Punjab FC. Click here for the complete preview.

19:11 hrs IST: And we kick-off at the EMS Corporation Stadium, as Gokulam Kerala take on NEROCA FC in the second match of the 2019-20 I-League season. Can the 2019 Durand Cup champions register a win or will it be the Northeastern side?

18:50 hrs IST: Meanwhile, NEROCA's Gift Raikhan will be expecting another good season for the club. Having bought in goalkeeper Marvin Devon Phillip and defender Taryk Sampson, Raikhan will hope that the departures of Katsumi Yusa and Singham Singh doesn't affect the club's ambitions.

18:46 hrs IST: Other than their terrific Durand Cup victory, Gokulam Kerala also reached the semifinals in the prestigious Sheikh Kamal International Club Cup in Bangladesh. This season could be special for the South Indian side, which finished seventh and tenth in their first two campaigns. Other than signing new players like Sebastian Thangmuansang and Malemngamba Meitei, the club has also reappointed Fernando Santiago Varela as head coach. Meanwhile, Ugandan Henry Kisekka has also returned.

18:19 hrs IST: "We have prepared for three months, and are now ready for the I-League," says Gokulam Kerala head coach Fernando Valera.

18:10 hrs IST: Gokulam Kerala and NEROCA have played against each other four times. The South Indian side has won once, with the Northeastern side coming out as victorious on two occasions. A match has been drawn. Also, Gokulam has scored three goals against NEROCA, meanwhile the latter has scored six.

17:47 hrs IST: In the earlier match today, which was also the season opener, Aizawl FC held Mohun Bagan to a draw at the Rajiv Gandhi Stadium. Here are the match highlights (CLICK HERE).

17:25 hrs IST: Gokulam Kerala won the Durand Cup in heroic winner, defeating Mohun Bagan in the final. Led by Marcus Joseph, they have been fantastic on the counter, but are up against a tough side today.

17:20 hrs IST: Good evening everyone! Welcome to Outlook's live coverage of the 2019-20 I-League match between Gokulam Kerala Vs NEROCA FC. Can the South Indian side continue with their fine preseason form against the visitors?

Speaking during the pre-match press conference, Varela revealed that his team could live upto their expectations. "For us it is a matter of pride to be able to represent our fans. It is our obligation to put on a good show for them and for them to enjoy watching the team play. We had good outings at Durand Cup and Sheikh Kamal tournament against prestigious teams. We are aware of having created expectations, but we must be humble and know that we must always improve," he said.

Meanwhile, Devon Phillip, who is also the NEROCA captain now, said during the pre-match press conference that the season is going to be tough for a young team like the Manipur-based side. "The preparation has been great over the last couple of months under the guidance of the coach. We have a youthful bunch and we are all eager to get underway on Saturday. It''s going to be a tough season but we are all set for this challenge," he said.