Real Kashmir led 1-0 at half time but TRAU FC fought back in the second half to split points in their I-League match. 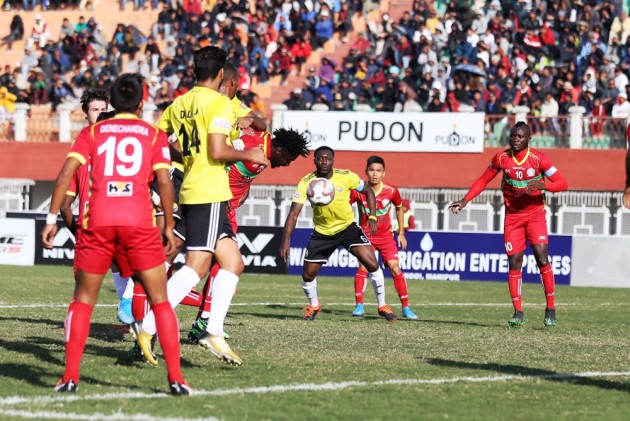 Debutants Tiddim Road Athletic Union FC on Sunday earned their maiden I-League point after playing out a 2-2 draw against Real Kashmir FC at the Khuman Lampak Stadium on Sunday.

Real Kashmir led 1-0 at half time but the home side fought back admirably well in the second half to split points with the Srinagar-based side.

Mason Robertson struck a brace for the visitors while Nigerians Emeka Princewill and Patrick Uche scored a goal apiece for the home side.

TRAU dominated possession in the first half and the combination and movement of Premjit Singh on the right flank and Falguni in the middle was impressive.

However, Real Kashmir coach David Robertson's strategy of crowding out his half with trusted defensive-minded players and looking to find his tall front men with long balls played dividends as TRAU found it tough to penetrate.

The first goal, in fact, came against the run of play. The strapping Scottish reposed his coach father's faith in playing him upfront yet again, when he dispossessed Sandeep Singh at the heart of the TRAU defence before unleashing a crisp right footer across the goal to beat Mithun Samanta all ends up.

TRAU continued to press for an equaliser but could not prize open Phurba Lachenpa's goal till the end of the half.

They did so as late as the 78th minute, when a measured cross from left-wing back Denechandram Meetei saw Emeka meet it with a bouncing header, beating Lachenpa for the first time in the match.

Fellow Nigerian Patrick Uche then beat him for the second time in the 82nd minute, this time from a free-kick which got an unfortunate deflection from Mason, wong-footing the keeper.

Mason, who was rightly adjudged Hero of the Match, ensured that the home side did not enjoy their lead for more than a minute. From another wonderful cross from Danish Farooq from the left, Mason rose perfectly to lob a header over Mithun to cancel out the TRAU lead.

Following the draw, Kashmir remain ninth on the table having bagged a couple of points from as many games while TRAU move up one place to tenth with one point from four matches.