Real Kashmir have come into the I-League high on confidence after successfully defending their IFA Shield title earlier this month in Kolkata. In another match on Monday, Neroca FC face debutants Sreenidi Deccan FC. 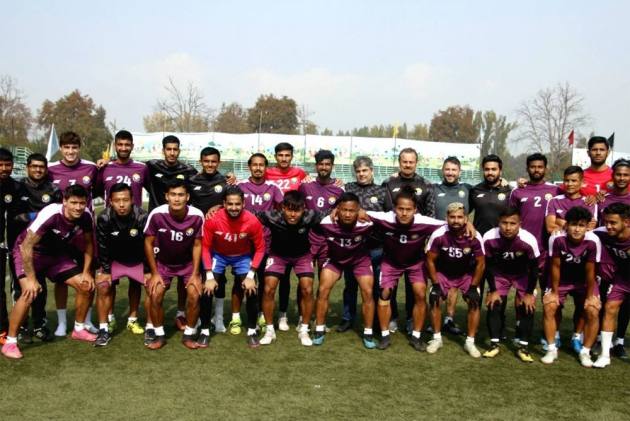 An in-form Real Kashmir FC is confident of beginning its I-League campaign with a win when it faces former champions Aizawl FC in Kalyani on Monday. (More Football News)

Real Kashmir have come into the I-League high on confidence after successfully defending their IFA Shield title earlier this month in Kolkata.

Their head coach David Robertson sounded confident of doing well in the league.

"Our preparation was very good. We came early to Kolkata. The team played a few friendlies and took part in IFA Shield. We played four I-League teams, and the team is looking solid in terms of fitness," Robertson said at the pre-match conference.

"Aizawl is a very competitive side. They have some quality players. It will be a tough game for sure. We will make sure that we turn up and get all three points."

He said his side will take one game at a time as any team is capable of defeating any other on a given day.

"We are ready for the challenge. We are looking forward to the season.”

In another match on Monday, Manipur side Neroca FC will be up against debutants Sreenidi Deccan FC in their opening match at the Naihati stadium.

NEROCA head coach Khogen Singh said his players are looking forward to begin with a win.

"Sreenidi is a very good team. We have seen them play the IFA Shield. They have many young players and their coach is experienced. They are a competitive side. We will analyze them and we are looking to getting the three points from the match," Khogen said.

Sreenidi head coach Fernando Varela is also confident about the capabilities of his squad.

"We have had a very good preseason in Hyderabad. We played the IFA Shield to figure out our level. Our players have character and personality. They will try their best to get all three points in the first match."

In the third match of the day, Mohammedan Sporting of Kolkata will lock horns against Sudeva Delhi FC at the Naihati Stadium.

It has been a good year for Mohammedan Sporting with Durand Cup final appearance followed by their first Calcutta Football League title win in 40 years.

However, head coach Andrey Chernyshov stated that the I-League will be a different ball game.

"We've waited for this game for four months. The first game is always special. We'll take one game at a time in the league. There are many teams who are favourites to win the trophy," said Chernyshov.

"We respect Sudeva Delhi. They have a lot of young players who have the hunger and desire to win," the Russian coach said.

Sudeva Delhi had a competitive debut season in 2020-21, finishing eighth. They have once again opted to compete with an all-Indian squad under new head coach Mehrajuddin Wadoo this season.